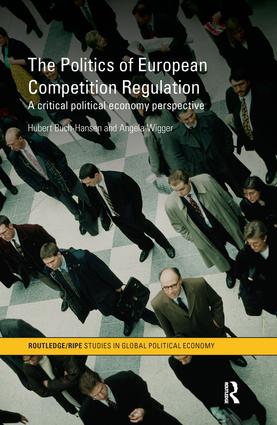 The Politics of European Competition Regulation

The Politics of European Competition Regulation provides an original and theoretically informed account of the political power struggles that have shaped the evolution of European competition regulation over the past six decades.

Applying a critical political economy perspective, this book analyses the establishment and development of competition regulation at European Community and national level since the 1950s. It puts forth the central argument that competition regulation came to reflect the broader shift towards a neoliberal order since the 1980s. Buch-Hansen and Wigger argue that this shift, which took place against the background of the gradual transnationalisation of capitalist production and the economic crisis of the late 1970s, was driven by the European Commission in alliance with the emerging transnational capitalist class.

The authors examine the political responses to the current global economic crisis in the fields of state aid, cartel prosecution and merger control and conclude that an alternative type of competition regulation, which forms part of a much broader transformation of the current socioeconomic order, is needed. This book will be of interest to students and scholars of (global) political economy, European integration and competition law.

'The great merit of this work is that it develops its critique of the neoliberal reform drive of the European Union not in categorical terms but by focusing on the complex issues involved in competition policy as a major pillar of economic governance. Building on an in-depth research programme, it paints a broad picture of the diverse strands of competition policy from a historical perspective, which unravels the politics that led to the original European antitrust treaty provisions, the application thereof back in the 60s and 70s, and the more recent neoliberal turn and its ongoing consolidation. What makes this study stand out is the combination, so rare these days, of a comprehensive topical treatment and a theoretically informed approach.' – Kees van der Pijl, Professor of International Relations, University of Sussex

'An excellent and rigorous critical political economy account that puts EU competition regulation policies in their place theoretically and historically, this work critiques mainstream positions and elaborates a radical alternative in a powerful historical analysis of the changing content, form, and scope of competition regulation policy. It offers a powerful critique of neo-liberalism and redefines the field.' – Bob Jessop, Professor of Sociology, Lancaster University

'A critical appraisal of competition policy in Europe has long been overdue as an antidote to the cloying pro-competition orthodoxy. Wigger and Buch-Hansen provide a systematic radical overview which is refreshing, provocative and thought provoking. Above all they locate competition within a political framework which emphasises power relations and identifies winners, losers and the corporate interests behind the design of policy. This study constitutes an essential contribution to a full understanding of European competition policy and the dynamics of reform.' – Stephen Wilks, Professor of Politics, University of Exeter

Angela Wigger is Assistant Professor of Global Political Economy at the Institute of Management Research at the Radboud University, The Netherlands.