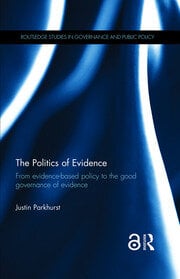 The Politics of Evidence: From evidence-based policy to the good governance of evidence

The Open Access version of this book, available at http://www.tandfebooks.com/, has been made available under a Creative Commons Attribution-Non Commercial-No Derivatives 3.0 license.

There has been an enormous increase in interest in the use of evidence for public policymaking, but the vast majority of work on the subject has failed to engage with the political nature of decision making and how this influences the ways in which evidence will be used (or misused) within political areas. This book provides new insights into the nature of political bias with regards to evidence and critically considers what an ‘improved’ use of evidence would look like from a policymaking perspective.

Part I describes the great potential for evidence to help achieve social goals, as well as the challenges raised by the political nature of policymaking. It explores the concern of evidence advocates that political interests drive the misuse or manipulation of evidence, as well as counter-concerns of critical policy scholars about how appeals to ‘evidence-based policy’ can depoliticise political debates. Both concerns reflect forms of bias – the first representing technical bias, whereby evidence use violates principles of scientific best practice, and the second representing issue bias in how appeals to evidence can shift political debates to particular questions or marginalise policy-relevant social concerns.

Part II then draws on the fields of policy studies and cognitive psychology to understand the origins and mechanisms of both forms of bias in relation to political interests and values. It illustrates how such biases are not only common, but can be much more predictable once we recognise their origins and manifestations in policy arenas.

Finally, Part III discusses ways to move forward for those seeking to improve the use of evidence in public policymaking. It explores what constitutes ‘good evidence for policy’, as well as the ‘good use of evidence’ within policy processes, and considers how to build evidence-advisory institutions that embed key principles of both scientific good practice and democratic representation. Taken as a whole, the approach promoted is termed the ‘good governance of evidence’ – a concept that represents the use of rigorous, systematic and technically valid pieces of evidence within decision-making processes that are representative of, and accountable to, populations served.

Chapter 2. Evidence-based policymaking – an important first step, and the need to take the next

Part II: The politics of evidence

Chapter 3. Bias and the politics of evidence

Chapter 4. The overt politics of evidence – bias and the pursuit of political interests

Chapter 5. The subtle politics of evidence - the cognitive-political origins of bias

Part III: Towards the good governance of evidence

Chapter 6. What is ‘good evidence for policy’? From hierarchies to appropriate evidence.

Chapter 7. What is the ‘good use of evidence’ for policy?

Chapter 8. From evidence-based policy to the good governance of evidence

‘This book is a marvellous interdisciplinary synthesis, grounded in case examples and at once critical and constructive. As such, it is both instructive for policy practitioners as well as moving the scholarship of the field forward.’ - Vivian Lin, Professor of Public Health, La Trobe University, Australia

‘This is essential reading for anybody working on the smarter use of evidence by government. It catalogues the many biases twisting how research is used by policymakers. It also addresses a vital challenge in our sector – a lack of legitimacy. As well as the academic rigour of this book, there are practical tips on what we can do about these problems, and lessons from across the globe showing where we get it wrong – and how we might get it right.’ - Jonathan Breckon, Head of the Alliance for Useful Evidence, U.K

‘This important book goes well beyond standard analyses of evidence informed policy with detailed discussions of the politics of evidence and the political origins (and the cognitive psychology) of bias in the use of research evidence. It addresses a core and often overlooked issue of the governance of evidence use - including the need to consider the institutions and processes in place that can enable the appropriate use of evidence in decision making. This book will be a pretty essential read for anyone concerned with the policy, practice or study of using research to inform decision making.’ - David Gough, Professor of Evidence Informed Policy and Practice, Director of the EPPI-