The Politics of Furniture
Identity, Diplomacy and Persuasion in Post-War Interiors 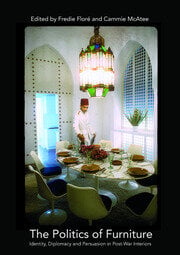 The Politics of Furniture: Identity, Diplomacy and Persuasion in Post-War Interiors

In many different parts of the world modern furniture elements have served as material expressions of power in the post-war era. They were often meant to express an international and in some respects apolitical modern language, but when placed in a sensitive setting or a meaningful architectural context, they were highly capable of negotiating or manipulating ideological messages. The agency of modern furniture was often less overt than that of political slogans or statements, but as the chapters in this book reveal, it had the potential of becoming a persuasive and malleable ally in very diverse politically charged arenas, including embassies, governmental ministries, showrooms, exhibitions, design schools, libraries, museums and even prisons.

This collection of chapters examines the consolidating as well as the disrupting force of modern furniture in the global context between 1945 and the mid-1970s. The volume shows that key to understanding this phenomenon is the study of the national as well as transnational systems through which it was launched, promoted and received. While some chapters squarely focus on individual furniture elements as vehicles communicating political and social meaning, others consider the role of furniture within potent sites that demand careful negotiation, whether between governments, cultures, or buyer and seller. In doing so, the book explicitly engages different scholarly fields: design history, history of interior architecture, architectural history, cultural history, diplomatic and political history, postcolonial studies, tourism studies, material culture studies, furniture history, and heritage and preservation studies.

Taken together, the narratives and case studies compiled in this volume offer a better understanding of the political agency of post-war modern furniture in its original historical context. At the same time, they will enrich current debates on reuse, relocation or reproduction of some of these elements.

Fredie Floré is an engineer-architect and Associate Professor in history of (interior) architecture at KU Leuven, Faculty of Architecture. She is a member of the research group Architecture Interiority Inhabitation (A2I). Her research focuses on the representational role of architecture, interiors and design in the post-war era.

Cammie McAtee is an independent curator and architectural historian based in Montréal. For many years, she was a curator at the Canadian Centre for Architecture. Her research focuses on post-war North American architecture and design.

By demonstrating how furniture can perform a politically active, as well as a functional and an aesthetic role in so many of our inside spaces, The Politics of Furniture takes design historical scholarship to a new level.

It contributes to a surge of new scholarship demonstrating the importance of the interior and its histories, in capturing the historical relevance of often ephemeral arrangements. The editors and authors have adopted and applied cutting edge ideas and approaches in the history of design, such as the role played by mediating discourses in the complex process of creating significance for designed goods, and the benefits of transnational design histories for the globalisation of design studies and design history.

McAtee and Flore’s contribution is not confined to the introduction and three chapters for which they were co-authors, as their editorial intelligence is seen throughout the book. The editors’ shared interest in Knoll (Associates and International) becomes a repeated motif throughout the book, functioning as an introductory case study, and as representative of a negotiation of US soft power and the identity of other nation states which wanted to be seen as contemporary in the post-war period. Some of the examples discussed will be familiar to readers well versed in the canon of design, such as the co-option of modernist design into US marketisation of the ‘American’ lifestyles, while others will be less well known, for instance the role of prisoner-made furniture in driving the modernisation of Japan. The Politics of Furniture is an important and relevant volume that will remain an influential reference for years to come.

This innovative and exciting addition to the literature develops recent specialist research and new debates on the role of furniture in interiors. ...[and] is an exciting and valuable addition to architecture and design studies that raises the bar for future authors.

"The editors and authors of The Politics of Furniture have set the academic bar high, with a serious collection of essays that were planned, researched, written, and edited with equal parts imagination and rigor."