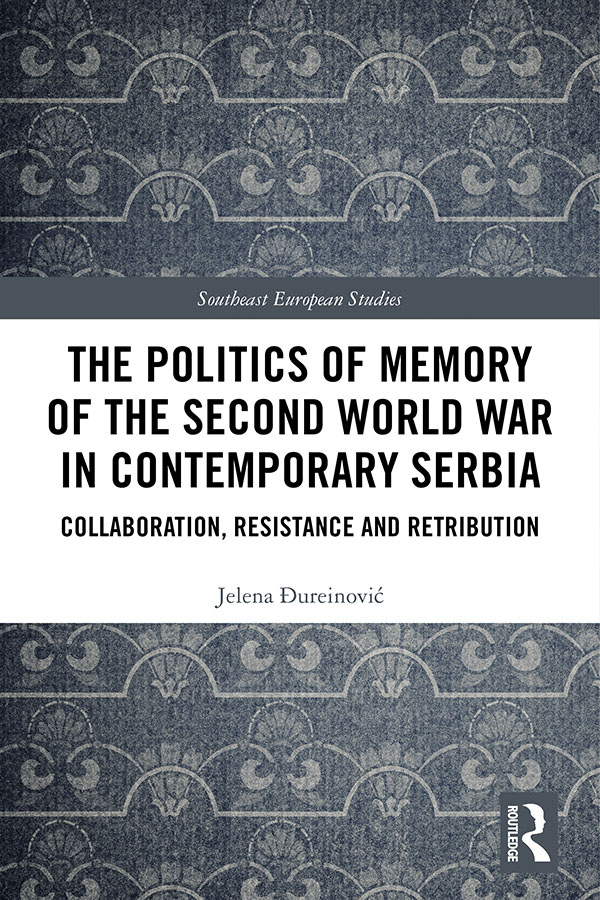 Exploring the concepts of collaboration, resistance, and postwar retribution and focusing on the Chetnik movement, this book analyses the politics of memory.

Since the overthrow of Slobodan Milošević in 2000, memory politics in Serbia has undergone drastic changes in the way in which the Second World War and its aftermath is understood and interpreted. The glorification and romanticisation of the Yugoslav Army in the Homeland, more commonly referred to as the Chetnik movement, has become the central theme of Serbia’s memory politics during this period. The book traces their construction as a national antifascist movement equal to the communist-led Partisans and as victims of communism, showing the parallel justification and denial of their wartime activities of collaboration and mass atrocities. The multifaceted approach of this book combines a diachronic perspective that illuminates the continuities and ruptures of narratives, actors and practices, with in-depth analysis of contemporary Serbia, rooted in ethnographic fieldwork and exploring multiple levels of memory work and their interactions.

It will appeal to students and academics working on contemporary history of the region, memory studies, sociology, public history, transitional justice, human rights and Southeast and East European Studies.

"Firmly situated in the discipline of history, but drawing upon a wide variety of theories, methodologies, and case studies from memory studies, transitional justice, and other interdisciplinary fields, Jelena Ðureinovic’s timely book is an excellent and ground-breaking study into the problematic issue of memory politics in contemporary Serbia and its ramifications for other Yugoslav successor states. Ðureinovic’s cutting edge research will be eye-opening for scholars working not only on the Balkans but for those outside the region, revealing how post-conflict and post-communist societies like Serbia are susceptible to manipulation by politicized mnemonic actors." – Vjeran Pavlakovic, University of Rijeka, Croatia

"In this well-researched and very convincing book, Jelena Ðureinovic demonstrates the processes of systematic politics of right-wing revisionism in Serbian history politics, adding new insights to our understanding of strategies, agency and power within history and memory politics. Ðureinovic’s thought-provoking work draws our attention to the dangers of forgetting, deliberately ignoring and downplaying crimes of the past, and to the dynamics of reinterpreting history to fit political demands and needs in the present. We should remember that such revisionism inevitably contributes to changing society’s understanding of the present and thereby also to shaping fears and expectations of the future, and Ðureinovic’s excellent research is an important reminder about how this works." –Tea Sindbæk Andersen, University of Copenhagen, Denmark

"This outstanding book is the first comprehensive look at the remarkable transformation of political memory of World War II in contemporary Serbia. Ðureinovic convincingly demonstrates that in its commitment to anticommunism, Serbia has embarked on a full scale revision of its WWII memory. This study is a timely warning of the seriously political consequences of playing politics with the past." – Jelena Subotic, Georgia State University, USA

Collaboration, resistance and retribution in Yugoslavia

Memory politics in post-Milošević Serbia: between anti-communism and ethnicisation

The context of the book: postsocialism

Post-Yugoslav Serbia as a case study

3. Yugoslav memory culture and its downfall

Reception of memory politics beyond compliance and rejection

Between the Chetnik revival and commemorations of the postwar retribution

The war and its aftermath in the hegemonic narratives

Purging Yugoslavia from the public

National reconciliation: ending the civil war within the Serbian nation

Imaginations of the Chetniks

The Chetniks as victims of communism

The State Commission for Secret Graves

The quest for the grave of Dragoljub Mihailović

7. Anti-communist memory politics from below

Commemorative practices from below

Equalising the Chetniks and the Partisans

Telling histories in the courtroom

Judicial abolishment of the uprising

Agency behind the court case

The Second World War in the courtroom

Interventions against the process

Jelena Ðureinovic holds a PhD in Modern and Contemporary History from Justus Liebig University in Giessen, Germany, where she teaches in the Department of History. Her research deals with the history and politics of memory of the Second World War in Yugoslavia and the post-Yugoslav space with the focus on the process of reinterpretation of the Chetnik movement in Serbia. She was a visiting research fellow at the Moore Institute in Galway, the Centre for Southeast European Studies at the University of Graz and the Institute of Culture and Memory Studies in the Slovenian Academy of Sciences and Arts. She has published on Europeanisation and memory politics, memory laws, discourses of victimhood under communism and relations between memory cultures in Croatia and Serbia.