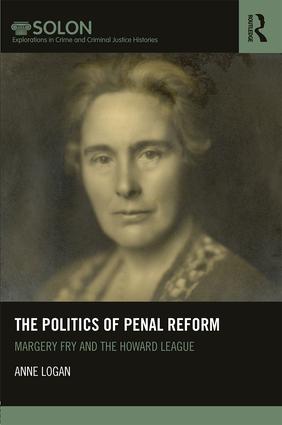 The Politics of Penal Reform

In the context of recent media scrutiny on the state of prisons in the UK, the efficacy of incarcerating large numbers of offenders is an issue which is rising steadily up the political agenda. In 2016, the Howard League for Penal Reform – an organization that has energetically lobbied for improvements in the treatment of offenders throughout its lifetime – celebrated its 150th anniversary.

This book considers the life and work of Margery Fry, the woman who created the modern Howard League and dominated it from 1918 until her death in 1958, and places the UK’s oldest surviving penal reform pressure group and its current work into their historical context. It examines Fry’s legacy as a campaigner for an international standard of prisoners’ minimum rights, which resulted in a United Nations charter, for the introduction of compensation for victims of criminal injuries, and for the abolition of the death penalty, and also considers her role in the establishment of criminology as an academic discipline and her organization of the first criminology lectures in Great Britain. It is essential reading for all those engaged in prisons research, penal reform and criminal justice history.

"This book restores Margery Fry to her rightful place in the history of penal reform – a history in which, because she was a woman and had to operate at the margins of power, her role has been marginalized and largely forgotten. In so doing, the book demonstrates the importance of gender to understanding the way that women (and men) have lived and worked, the choices they made, and also the way they have been treated by history."

"In this fascinating biography of Margery Fry, Anne Logan restores her to her rightful place as a highly effective and historically significant penal reformer and a pioneer of British criminology. More than this, her huge contributions to public life included her work in higher education and education policy, her feminism, her unparalleled networking and lobbying skills and her pivotal role in the development of the Howard League as the foremost penal reform organisation in England and Wales. Logan places Fry within the context of her family and class background, as well as in relation to women's history."

4. The Creation of the Howard League

5. Pressure Behind the Scenes

Anne Logan is Senior Lecturer in Social History at the University of Kent, UK.