The Politics of Post-9/11 Music: Sound, Trauma, and the Music Industry in the Time of Terror 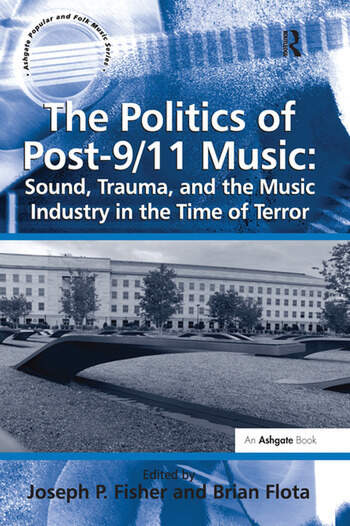 The Politics of Post-9/11 Music: Sound, Trauma, and the Music Industry in the Time of Terror

Seeking to extend discussions of 9/11 music beyond the acts typically associated with the September 11th attacks”U2, Toby Keith, The Dixie Chicks, Bruce Springsteen”this collection interrogates the politics of a variety of post-9/11 music scenes. Contributors add an aural dimension to what has been a visual conceptualization of this important moment in US history by articulating the role that lesser-known contemporary musicians have played”or have refused to play”in constructing a politics of protest in direct response to the trauma inflicted that day. Encouraging new conceptualizations of what constitutes 'political music,' The Politics of Post-9/11 Music covers topics as diverse as the rise of Internet music distribution, Christian punk rock, rap music in the Obama era, and nostalgia for 1960s political activism.

Joseph P. Fisher is a Learning Specialist in the Office of Disability Support Services at The George Washington University. His research interests are in twentieth and twenty-first century American literary and cultural studies, as well as in popular music studies. His most recent project has been organizing the symposium Composing Disability: Writing, Communication, Culture, which has brought international attention to The George Washington University. Brian Flota is the author of A Survey of Multicultural San Francisco Bay Literature, 1955-1979, which was awarded the Adele Mellen Prize for Distinguished Contribution to Scholarship in 2009. His scholarly work has appeared in journals such as Interdisciplinary Humanities and EAPSU Online. He also contributes music reviews to the online blog The Fiddleback. He received his Ph.D. in English from The George Washington University in 2006 and has taught at George Mason University and Oklahoma State University. He is currently affiliated with the Graduate School of Library and Information Science at the University of Illinois at Urbana-Champaign.

'This collection conveys the passionate response by younger scholars to the cultural aspects of a crisis that has increasingly defined the world. Through looking at music beyond the arenas of the big-ticket pop stars, these papers are able to explain many of our more real and complex reactions - reflecting our own disquiet in the face of the ghosts of our own history.' Paul Attinello, Newcastle University, UK ’This book would make an interesting addition to any reading list... recommended: Upper-division undergraduates through faculty and professionals; general readers.’ Choice '... a lively and significant contribution.' Music and Letters