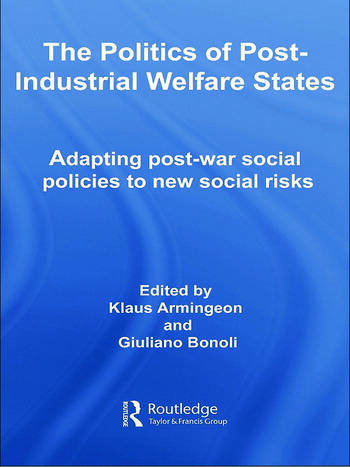 This new study assesses the welfare state to ask key questions and draw new conclusions about its place in modern society.

It shows how the welfare states that we have inherited from the early post-war years had one main objective: to protect the income of the male breadwinner. Today, however, massive social change, in particular the shift from industrial to post-industrial societies and economies, have resulted in new demands being put on welfare states. These demands originate from situations that are typical of the new family and labour market structures that have become widespread in western countries since the 1970s and 1980s, characterised by the clear prevalence of service employment and by the massive entry of women in the labour market.

Against this background, this book:

* presents a precise and clear definition of 'new social risks'. A concept being increasingly used in welfare state literature.

* focuses on the groups that are mostly exposed to new social risks (women, the young, the low-skilled) in order to study their political behaviour.

This book will be of great interest for all students and scholars of politics, sociology and the welfare state in particular.

'A coherent collection of comparative chapters which cover either all or a sample of advanced industrial democracies.' - International Social Security Review, Vol. 59

'Concerntrates on the process of adapting welfare states to changing structures of social risks. First, looks at how those who are most exposed to the new risks (women, the young, low-skilled workers) mobilize in the political arena and examines their demands, then moves on to analyze specific instances of welfare state adaptation in the fields of care policy, pensions and labour market policies.'