The Politics of Regulatory Reform 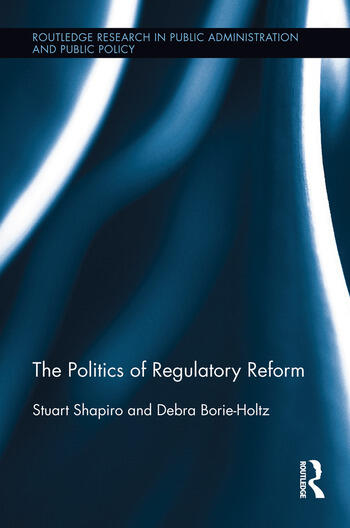 The Politics of Regulatory Reform

Regulation has become a front-page topic recently, often referenced by politicians in conjunction with the current state of the U.S. economy. Yet despite regulation’s increased presence in current politics and media, The Politics of Regulatory Reform argues that the regulatory process and its influence on the economy is misunderstood by the general public as well as by many politicians.

In this book, two experienced regulation scholars confront questions relevant to both academic scholars and those with a general interest in ascertaining the effects and importance of regulation. How does regulation impact the economy? What roles do politicians play in making regulatory decisions? Why do politicians enact laws that require regulations and then try to hamper agencies abilities to issue those same regulations? The authors answer these questions and untangle the misperceptions behind regulation by using an area of regulatory policy that has been underutilized until now. Rather than focusing on the federal government, Shapiro and Borie-Holtz have gathered a unique dataset on the regulatory process and output in the United States. They use state-specific data from twenty-eight states, as well as a series of case studies on regulatory reform, to question widespread impressions and ideas about the regulatory process.

The result is an incisive and comprehensive study of the relationship between politics and regulation that also encompasses the effects of regulation and the reasons why regulatory reforms are enacted.

Stuart Shapiro is Associate Professor and Director of the Public Policy Program at the Bloustein School of Planning and Public Policy, Rutgers University. Professor Shapiro’s research focuses on the regulatory process and regulatory reform, including the role of cost-benefit analysis, public participation, and e-rulemaking. He has also done research on the regulatory process in the states. Prior to becoming a professor, he was a desk officer and manager in the Office of Information and Regulatory Affairs at the Office of Management and Budget.

Debra Borie-Holtz is an instructor at the Bloustein School and a senior research analyst at the Center for Women and Work. Debra’s research interests include state legislative leadership and policy formation, regulations, women in government and survey methodology. Prior to receiving her doctorate, Debra held a Presidential appointment as an agency director during the Clinton Administration and served as New Jersey Assistant Secretary of State during the Florio Administration.

"Shapiro and Borie-Holtz distinguish the reality from the rhetoric of regulatory reform by looking at past efforts through several different lenses. In clearly written prose, they review theories on what motivates regulation and initiatives for reform, present empirical analysis of reform efforts in the states, and supplement their findings with in-depth case studies and interviews. Anyone interested in understanding the motivations and effects of regulatory reform, regardless of their views on its merits, will benefit from reading this book."

"This important book provocatively challenges the conventional wisdom of regulatory reform, making the case that administrative procedures do little to affect the timing or outcomes of government rulemaking. Shapiro and Borie-Holtz convincingly explain why politicians nevertheless act as if procedure matters, revealing why regulatory reform remains a popular but controversial item on state and federal policy agendas."

—Cary Coglianese, Edward B. Shils Professor of Law and Professor of Political Science, University of Pennsylvania

"Not only would it serve as a valuable text for courses in political science and public administration, but it will benefit anyone interested in understanding regulatory reform."

"The book provides some of the first empirical traction on the imposition and effects of regulatory reforms across the 50 American states—a topic that has long been recognized as important but has been infrequently investigated systematically."

"Shapiro and Borie-Holtz (both, Rutgers Univ.) provide a convincing account of the allure of regulatory reform.  Summing Up: Highly recommended. Upper-division undergraduates."