The Politics of Supranational Banking Supervision in Europe 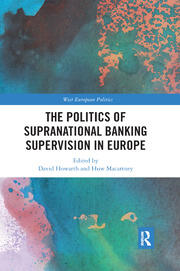 The Politics of Supranational Banking Supervision in Europe

Europe’s sovereign debt crisis and the accompanying national bank crises in the European Union brought bank regulation and supervision to the top of the EU policy agenda. In a few short years, we have witnessed a ‘great leap forward’ for European integration marked by over a dozen pieces of EU legislation shaping the operation of banks, rules on bank capital, reconfigured supervisory agencies, and Banking Union. The significance of these measures lies however, in the fact that they constitute the most dramatic transfer of policy-making powers to the European level since the start of Economic and Monetary Union in 1999.

This volume addresses the three main political battles behind the adoption of these new regulatory and supervisory policies. First, it examines divisions among states, both according to their domestic institutional structures, including distinct financial systems, as well as their creditor or debtor status in the crisis. Second, it studies the battle over national versus supranational jurisdiction. Third, it explores the conflictual process of policy learning and the activation of epistemic communities who claim competence to address the crisis.

This book was originally published as a special issue of the journal West European Politics.

David Howarth is Professor of Political Economy at the University of Luxembourg. He is the author or co-author of five monographs, including The Political Economy of Banking Union (2016). He has also published over eighty journal articles and book chapters on political economy topics.