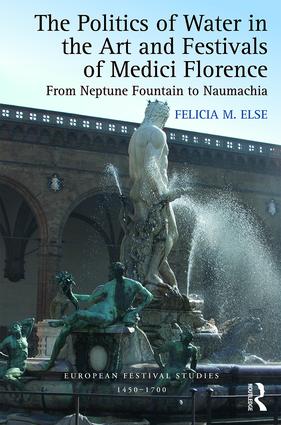 By Felicia M. Else

This book tells the story of one dynasty's struggle with water, to control its flow and manage its representation. The role of water in the art and festivals of Cosimo I and his heirs, Francesco I and Ferdinando I de' Medici, informs this richly-illustrated interdisciplinary study. Else draws on a wealth of visual and documentary material to trace how the Medici sought to harness the power of Neptune, whether in the application of his imagery or in the control over waterways and maritime frontiers, as they negotiated a place in the unstable political arena of Europe, and competed with foreign powers more versed in maritime traditions and aquatic imagery.

"The Politics of Water gets to the bottom of the observation formulated at the outset from several perspectives and, in addition to studies on European festival culture, art history, urban planning and architectural history issues, also evaluates a not insignificant amount of archival sources published for the first time. In addition to the presentation of profound knowledge of the political festivals in and outside Florence, Felica M. Else succeeds in tracing the integration of maritime topics in the Medici public space. This gives a comprehensive picture of a dynasty that managed to 'take up the fight against water' within the 16th century and make it fruitful for 'its representation'." - Anna Lisa Schwartz, Sehepunkte

1. The Arrival of Cosimo’s Neptune: Early Works and Influences from Abroad

2. Art and Festival: The Neptune Fountain in the Piazza della Signoria and the Entrata of Johanna of Austria in 1565

3. Granducal Florence and the Age of Francesco I, 1566–1587: Courtly Pleasures and the Decline of Public Authority

4. A Revitalized Age: Ferdinand I and the Wedding of 1589

Felicia M. Else is Professor of Art History in the Department of Art and Art History at Gettysburg College.

This series, in association with the Society for European Festivals Research, builds on the current surge of interest in the circumstances of European Festivals – their political, religious, social, economic and cultural implications as well as the detailed analysis of their performance (including ephemeral architecture, scenography, scripts, music and soundscape, dance, costumes, processions and fireworks) in both indoor and outdoor, urban and court locations. Festivals were interdisciplinary and, on occasion, international in scope. They drew on a rich classical heritage and developed a shared pan-European iconography as well as exploiting regional and site-specific features. They played an important part in local politics and the local economy, as well as international negotiations and the conscious presentation of power, sophistication and national identity. The series, including both essay collections and monographs, seeks to analyse the characteristics of individual festivals as well as to explore generic themes. It draws on a wealth of archival documentary evidence, alongside the resources of galleries and museums, to study the historical, literary, performance and material culture of these extravagant occasions of state.