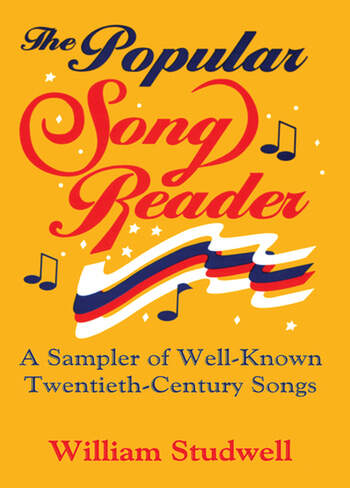 The Popular Song Reader: A Sampler of Well-Known Twentieth-Century Songs

Who is the Bill Bailey whose exploits were chronicled in song? How many popular songs have titles containing the words “moon,” “heart,” or “baby”? Where is the road to Mandalay? How many female names can you think of that have been mentioned in song titles? Discover this fascinating information and more about some of America's most known and loved popular songs in this delightful sampler. The Popular Song Reader contains over 200 short essays on the backgrounds of a wide variety of twentieth-century American popular songs. The witty and knowledgeable essays touch upon several hundred traditional-style pop songs as well as early rock compositions. The essays are filled with anecdotes, humor, irony, and even poetry that reflect the author's offbeat and somewhat irreverent manner, while also presenting a broad spectrum of American popular songs in their historical and cultural contexts. In addition to information about each song and its composer, the author also discusses how the song reflected society at the time and also how the song itself has influenced popular culture. Pop music fans will find this a highly entertaining and readable guide to the best American popular music of the twentieth century. Divided into five sections, the book covers popular songs from the Tin Pan Alley era (By the Light of the Silvery Moon, California, Here I Come, Let Me Call You Sweetheart, She'll Be Comin’Round the Mountain, and When Irish Eyes are Smiling), the swing/big band era (Don't Get Around Much Anymore, Heart and Soul, In the Mood, Stardust, and Stormy Weather), and the rock era (Chances Are, Good Vibrations, Love Me Tender, Misty, Rock Around the Clock, Stop! In the Name of Love, and The Twist). The Popular Song Reader provides new insights on all-time favorites from Broadway musicals, movies, and television including Ain't Misbehavin', Give My Regards to Broadway, My Funny Valentine, Aquarius, Cabaret, Luck Be a Lady, Mack the Knife, Don't Fence Me In, Over the Rainbow, Singin’in the Rain, and the theme songs from Star Wars , All in the Family, Cheers, and M*A*S*H.

William E. Studwell, MSLS, MS, is Professor, University Libraries,at Northern Illinois University in DeKalb. He is the authorof reference books on Christmas carols, ballet, and opera, as well asother books on music and several on library science. He has alsoauthored almost 200 articles (over 60 on music) and has made morethan 100 appearances in national, regional, and local media. Mr.Studwell is the editor of Music Reference Services Quarterly and amember of the American Library Association.