The Populist Radical Right in Poland
The Patriots 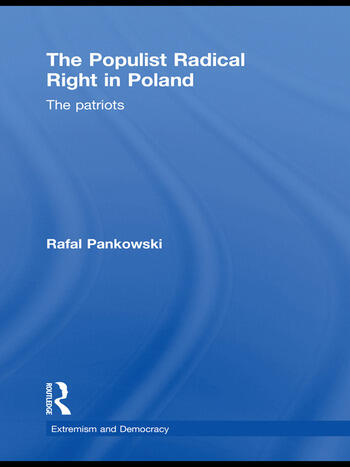 The Populist Radical Right in Poland: The Patriots

In this important and accessible study, Rafal Pankowski makes sense of the rapid growth of organized radical nationalism on the political level in Poland by showing its origins, its internal dynamics and the historical, political, social and cultural context that has made it possible.

From political obscurity to the heart of mainstream politics, the recent rise of the extreme right in the Polish context surprised many observers. In the 1990s Poland was usually referred to as a country without significant extremist or populist movements. It was considered to be a stable, even if young, democracy, and ‘extremists’ were perceived as just a little nuisance to the liberal-democratic consensus. By the mid-2000s, the picture changed completely, two populist radical right parties entered into a coalition government with the right-wing conservative Law and Justice Party. All of a sudden, racist extremist affiliations were not a hindrance to a high-level career, but were tolerated or even seemed positively valued. The entrance of extremists into state structures was no longer a matter of isolated individual cases, but took on systemic features.

Presenting a detailed analysis of the Polish national populism, the book will use theories of social movements (in particular the concept of discursive opportunity structure), as well as relevant theories of transition and democratization. In particular, the specific cultural resources of Polish nationalist populism are to be analyzed because they are deemed to be among principal reasons for the relative success of the radical nationalists and their particular brand of identity politics

The book not only provides a detailed analysis of Polish nationalism but will also have a much broader trans-national significance, essential reading for scholars of national populism in the context of post-communism and beyond.

1. Pre-communist legacies  2. Communist-period legacy  The national question and the communist regime  3. After communism  4.The league of polish families and its integral nationalism  5.Self-defence: radical populism  6. The anti-liberalism of law and justice 7. Nationalist populism in power: the 2005-7 experiment and beyond  8. Conclusion

Rafal Pankowski has served as deputy editor of ‘Nigdy Wiecej’ (Never Again) magazine since 1996. He has published widely on racism, nationalism, xenophobia and other issues including the books Neo-Fascism in Western Europe (1998) and Racism and Popular Culture (2006). He currently works as a lecturer at Collegium Civitas and head of the Warsaw-based East Europe Monitoring Centre.

'This book's credibility comes not simply from the author's success in unearthing previously hidden material, but in its serious analysis of the historical, economic and cultural factors behind the emergence of Law and Justice, which is examined in the context of its links to other far-right parties and movements in Poland' - Richard Howitt, New Statesman, April 2010

'The book by Pankowski is undoubtedly an important voice in the debate on the ideological identity and the sources of success of the national populist parties in contemporary European democracies.' - e-Extreme (Electronic Newsletter of the ECPR-SG on Extremism and Democracy), Volume 11, No. 4, December 2010