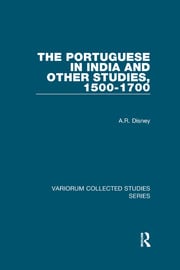 The studies brought together in this volume were published over the last thirty years and are concerned, directly or indirectly, with the Portuguese presence in India between about 1500 and 1650. They have been arranged into four groups of which the first, 'The Portuguese in India', includes pieces on the changing character of the empire in India, Goa in the 17th century, the Portuguese India Company of 1628-33, smugglers, the great famine of the early 1630s and the ceremonial induction process for new viceroys. A second group focuses on the life, career and background of the count of Linhares, before, during and after his term as viceroy at Goa. The third group consists of studies on travel and communications between India and Portugal, both by sea and by land. The collection concludes with studies under the heading of 'historiography and problems of interpretation', on Charles Boxer as a biographer, and on Vasco da Gama's reputation for violence.

Contents: Preface; Introduction; Part 1 The Portuguese in India: The first Portuguese India Company, 1628-33; The Portuguese empire in India, c.1550-1650; Goa in the 17th century; Smugglers and smuggling in the Western half of the Estado da Ãndia in the late 16th and early 17th centuries; Famine and famine relief in Portuguese India in the 16th and early 17th centuries; The ceremonial induction of incoming viceroys at Goa in the 16th and 17th centuries. Part 2 Viceroy Linhares and his Era: The viceroy Count of Linhares at Goa, 1629-1635; The viceroy as entrepreneur: the Count of Linhares at Goa in the 1630s; From viceroy of India to viceroy of Brazil? The Count of Linhares at court (1636-39); Scaling down and holding on: life in Portuguese Tangier in the early 17th century; The fiscal reforms of Viceroy Linhares at Goa; Ex-Viceroy Linhares and the galleys of Sicily, 1641-44. Part 3 Travel and Communications by Land and by Sea: The Portuguese and foreign European overland merchants trading between the Eastern Mediterranean and South and Southwest Asia, c.1515-1645; The world of long-distance voyaging in the 17th century: the Lisbon-Goa fleet of 1629 as a case study; The Gulf route from India to Portugal in the 16th and 17th centuries: couriers, traders and image-makers; First encounters in early Portuguese travel literature; The Portuguese and Saint Helena. Part 4 Historiography and Problems of Interpretation: Vasco da Gama's reputation for violence: the alleged atrocities at Calicut in 1502; Charles Boxer as a biographer: a preliminary evaluation; Index.

'This collection of essays constitutes an invaluable research tool to scholars in Lusophone studies and to specialists in colonial studies.' Sixteenth Century Journal