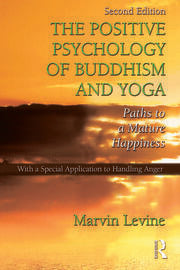 The Positive Psychology of Buddhism and Yoga: Paths to A Mature Happiness

This book describes Buddhist-Yogic ideas in relation to those of contemporary Western psychology. The book begins with the Buddhist view of the human psyche and of the human condition. This leads to the question of what psychological changes need to be made to improve that condition. Similarities between Buddhism and Western Psychology include:

Both are concerned with alleviating inner pain, turmoil, affliction and suffering.

Both are humanistic and naturalistic in that they focus on the human condition and interpret it in natural terms.

Both view the human being as caught in a causal framework, in a matrix of forces such as cravings or drives which are produced by both our biology and our beliefs.

Both teach the appropriatenss of compassion, concern and unconditional positive regard towards others.

Both share the ideal of maturing or growth. In the East and the West, this is interpreted as greater self possession, diminished cravings and agitations, less impulsivity and deeper observations which permit us to monitor and change our thoughts and emotional states.

Buddhism, Yoga, and Western Psychology, especially the recent emphasis on positive psychology, are concerned with the attainment of deep and lasting happiness. The thesis of all three is that self-transformation is the surest path to this happiness.

Part 1. Buddhism. 1. King Ashoka’s Question: What is Your Secret?: A tale about the conversion of King Ashoka to Buddhism. 2. Maturity and Serenity: The Buddhist approach to attaining these ideals. 3. The Story of Siddhartha: The life of Prince Siddhartha and his transformation into the Buddha. 4. The Hindu Context: The world in which the Buddha was raised; the influential ideas. 5. The Core of the Buddha’s Teachings: An overview of the Four Noble Truths; a comparison to the modern scientific outlook. 6. The Noble Truth of Dukkha (Suffering), Part 1: Suffering and Impermanence: The meaning of suffering; impermanence and the potentiality for suffering. 7. The Noble Truth of Dukkha, Part 2: Caught in the Causal Matrix: Dukkha as helplessness, as "caughtness" in a matrix of forces; a comparison to the western concept of determinism. 8. The Noble Truth of Tanha (Craving): Cravings as the cause of suffering; the meaning of cravings. 9. The Noble Truth of Nirvana (Liberation), Part 1: Conquer the Beasts Within: The cravings and their transformation; the western concept of reinforcement; detachment from goals. 10. The Noble Truth of Nirvana, Part 2: The Nature of Attachment: Attachment versus enjoyment; attachment versus devotion. 11. The Buddha: the Compassionate One: Some implications of the view expressed in the First Three Noble Truths, particularly the necessity for compassion; a comparison to clinical psychology. 12. Supermaturity: The Buddhist ideals of living; a comparison to Western ideals. 13. Anatman Reconsidered: You Are Not Your Mind: The essential self (cf. Buddha-Nature); a comparison to the Western (Behaviorist) view. 14. The Noble Truth of Magga (The Path), Part 1: Wisdom and Ethics: The first five branches of the eight-fold path 15. The Noble Truth of Magga, Part 2: Mental Discipline: Right Effort and Mindfulness; a variety of meditative practices 16. Buddhist Problem Solving: Buddhist solutions to political and personal problems, contrasted with traditional solutions Part 2. Yoga. 17. Yoga and Buddhism: Atman as the distinguishing feature; various types of Yoga. 18. I Discover Hatha Yoga: How I came to the practice of Hatha Yoga; breathing and postures; benefits of the practice. 19. Savasana: The particular benefits of Savasana (the Dead-Weight Pose); its relation to Transcendental Meditation and to Benson’s Relaxation Response. 20. The yogic state, Part 1: Immersion: The "inner" practice of Hatha Yoga, of learning to maintain focused attention; a comparison to Western approaches. 21. The yogic state, Part 2: Transforming Judgment: Replacing pejorative and prideful judgments with a more dispassionate assessment; Western attitudes toward judgment. 22. The yogic state, Part 3: Life is Where You Find it: Generalizing the state (calm, immersed, judgment-free) practiced in Hatha Yoga to all of living. 23. yogic Theory: The Unenlightened Mind: The components of the mind before any enlightenment has occurred. 24. The Eight Angas, Part 1: The Practices: The proper attitudes (Yamas and Niyamas) that are cultivated and practiced 25. The Eight Angas, Part 2: The Experiences: The deepening levels of experience that go to make up the yogic state. 26. yogic Theory: The Enlightenment Mind: The components of the fully enlightened mind. 27. yogic Problem Solving: yogic solutions to political and personal problems, contrasted with traditional solutions Part 3. Western Psychology. 28. Buddhism, Yoga, and Western Psychology: A summary of the similarities between East and West; Buddhism as empiricism. 29. Mindfulness and Right Thoughts: Traditional psychotherapy seen as mindfulness training; the treatment of "wrong thoughts" in Cognitive Therapy. 30. Problem Solving as Compassionate Action: Replacing anger and fear with the problem-solving stance. 31. Empathic Assertiveness as Right Speech: Principles of criticizing with concern for the rights of others. 32. Psychological Applications of Eastern Methods: Mindfulness training as a therapeutic procedure; mutual Eastern and Western Influence Part IV: Handling Anger. 33. The Nature of Anger: A broad definition, ranging from irritation to rage; the variables of intensity, duration, and threshold. 34. Anger: Assumptions and Levels of Expression: The assumptions underlying the present treatment; levels of self-transformation to which we can aspire. 35. A Schematic, Physiological Model: A sketch of changes in the nervous system when provoked; the effects of breathing, relaxing, and cognitive reinterpretation. 36. General Methods for Decreasing Anger: Techniques that raise the threshold so that we’re less likely to become angry. 37. Specific Methods, Part I: Right Views of Others: Seeing others properly, especially the forces at work; the sense in which provocations are not personal. 38. Specific Methods, Part 2: Changing One’s Own Attitudes: Seeing oneself properly: Question beliefs, develop broad tolerances, learn what matters. 39. Specific Methods, Part 3: When Anger Occurs: The importance of waiting, breathing, relaxing, and rehearsing; the role of cognitive techniques Afterword References Additional Readings Author Index Subject Index

Marvin Levine, a well-known researcher and theorist in cognitive-experimental psychology, received his M.A. at Harvard where he worked with B.F. Skinner and George Miller, and his Ph.D. with Harry Harlow at the University of Wisconsin. Since 1965 he has been a professor in the Department of Psychology at Stony Brook University.

His earliest work was on intellectual problem solving, research that served to counter the then popular conditioning view of human behavior. He later turned his attention to interpersonal problem solving, giving workshops on assertiveness training and anger management, and for several years helped resolve disputes as a volunteer mediator. He is also a published poet and a professional musician. As is revealed in this volume, all these activities have contributed to his understanding of human nature.

He also maintained a long-standing interest in Eastern philosophy. He gradually began to see similarities between the conceptions and methods of Buddhism and Yoga and those of Western psychotherapy. In this accessible book he discusses these three systems. The exotic and "mystical" trappings from Buddhism and Yoga are stripped away. The emphasis, instead, is on their aims and methods, and their relation to Western psychology. This approach provides a clear understanding of how to live a more useful, happier life. It is also an essential read for anyone interested in an enlarged framework for modern psychology.

"I have never read a clearer or more useful introduction to the positive psychological practices of Buddhism and Yoga. Each page is simply fascinating reading and appeals simultaneously to the lay reader and the seasoned scholar. The discussion of anger and how to overcome it is life-transforming. I would strongly recommend this book to undergraduates, graduate students, and professionals. One rarely finds a book that reaches right into one’s mind and soul with a powerful vision of human enhancement. This is one of them." - Stephen G. Post Director, Center for Medical Humanities, Compassionate Care, and Bioethics, Stony Brook University

"There are few books that can make a real difference in people’s lives…this is one of them. It is an intellectual tour-de-force. It is a "must read" for any psychologist interested in Eastern thought. Many hundreds of millions of people believe that Enlightenment is the ultimate goal in life. Levine’s new second edition could be the best first step toward becoming "enlightened" that any of us will take." - George Howard, Psychology Department, University of Notre Dame

"After decades of focusing on mental illness and what is wrong with human nature, psychological science has renewed its interest in the positive aspects of human existence. It is in this vein that Marvin Levine offers a blend of western science and eastern practices to help us become more peaceful and less anxious, a goal he calls mature happiness. Levine’s newest book has many ideas and techniques that just might help us become calmer and even happier and wiser." - Dr. Diane F Halpern, Professor of Psychology , Claremont McKenna College and Past President of APA

"Marvin Levine tells a profound story in a style that engages while it informs us of new ways to view the world within ourselves and without. This book teaches us vital lessons about how these Eastern philosophical traditions can be integrated with Western psychological methods of understanding the mind….I think it has much value to novices as well as to professionals in these areas. As a psychologist, Marvin Levine is uniquely qualified to reveal the strands of overlap between these Eastern views of the human condition and those in Western psychological practices." - Philip Zimbardo, Department of Psychology, Stanford University, Past President of APA

"The book is lucid in its explanation of the principles of Buddhism and Yoga. I have never seen a clearer exposition of this kind. It makes a good case that many of these principles are compatible with those of modern, empirically-grounded Western psychology." - Donald Routh, University of Miami