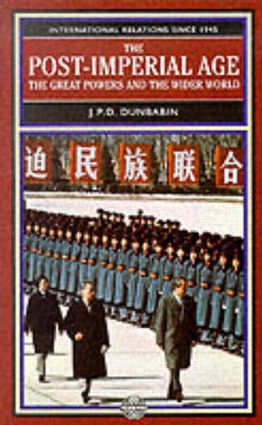 The Post-Imperial Age: The Great Powers and the Wider World

International Relations Since 1945: a history in two volumes, 1st Edition

This volume looks at the impact on the wider world of the end of the European empires and their replacement by a new international order dominated by East-West rivalries. After surveying the decolonization process, the book looks successively at the different patterns of experience in Southern Africa, South East Asia and India, East Asia and the Pacific, the Middle East, and the Americas. It concludes with a sustained analysis of the International System -- the functioning of international organizations and the global role of money and trade.

14. Oil. 15. Arabia and the Gulf. Part Four: The Americans. 16. The inter-American political system, and attempts to exclude communism. 17. The Americas in, and since, the 1980s. Appendix: The Falklands, and the Antarctic.

Part Five: The International System. 18. The nature of, and leadership in, the international system; attempts at collective action through the United Nations. 19. Money and trade in the Western World. Index.