The Postcolonial Epic
From Melville to Walcott and Ghosh 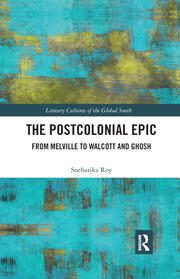 The Postcolonial Epic: From Melville to Walcott and Ghosh

This book demonstrates the epic genre’s enduring relevance to the Global South. It identifies a contemporary avatar of classical epic, the ‘postcolonial epic’, ushered in by Herman Melville’s Moby Dick, a foundational text of North America, and exemplified by Derek Walcott’s Caribbean masterpiece Omeros and Amitav Ghosh’s South Asian saga, the Ibis trilogy.

The work focuses on the epic genre’s rich potential to articulate postimperial concerns with nation and migration across the Global North/South divide. It foregrounds postcolonial developments in the genre including a shift from politics to political economy, subaltern reconfigurations of capitalist and imperial temporalities, and the poststructuralist preoccupation with language and representation. In addition to bringing to light hitherto unexamined North/South affiliations between Melville, Walcott and Ghosh, the book proposes a fresh approach to epic through the comparative concept of ‘political epic’, where an avowed national politics promoting a culture’s ‘pure’ origins coexists uneasily with a disavowed poetics of intertextual borrowing from ‘other’ cultures.

Acknowledgements.  Introduction: From Classical to Postcolonial Epic  1. Rallying the Tropes: The Language of Violence and the Violence of Language  2. ‘History in the Future Tense’: Genealogy as Prophecy  3. ‘The Artifice of Eternity’: Ekphrasis as ‘An-other’ Epic  4. Conclusion: Resistant Nostalgia.  Bibliography.  Index

Sneharika Roy is Assistant Professor of Comparative and English Literature at the American University of Paris, France. Her research focuses on comparative approaches to epic that bridge classical and postcolonial theory and literatures. She is a contributor to the MLA volume Approaches to Teaching the Works of Amitav Ghosh and to the French encyclopaedic project Dictionnaire des litteratures indiennes (Dictionary of Indian Literatures).

‘A brilliant cross-cultural reading of epic, which wrests the genre from its classical origins to demonstrate how its contemporary postcolonial incarnations unsettle the essentialist notions of nation inherent in earlier conceptions of the form. Roy’s study is also a major contribution to scholarship on Melville, Walcott and Ghosh.’

‘The Postcolonial Epic makes an essential contribution to the study of world literature but more than that its careful and in-depth presentation of the sea-borne epic, ancient and modern, American, Caribbean, and Indian, imperial, national, and postcolonial, in theory and in practice, increases our understanding of literature itself, how it works and what it can do.’