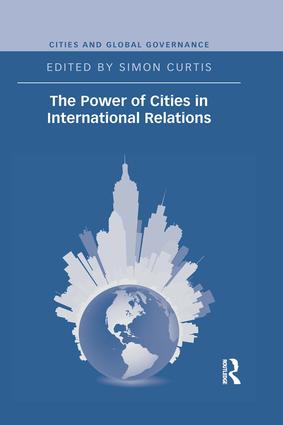 The Power of Cities in International Relations

Cities have become increasingly important to global politics, but have largely occupied a peripheral place in the academic study of International Relations (IR). This is a notable oversight for the discipline, although one which may be explained by IR’s traditional state centrism, the subjugation of the city to the demands of the territorial state in the modern period, and a lack of conceptual and analytical frameworks that can allow scholars to include the impact of cities within their work.

Presenting case-specific scholarship from leading experts in the field, each contribution guides the reader through the changing nature of cities in the international system and their increasing prominence in global governance outcomes. The book features case studies on the financial power of cities, city action in the security domain, collaboration of cities in coping with environmental problems, transnational urban regions, and mayors as international actors to illustrate if the relationship between the city and the state has changed in profound ways, and how cities are empowered by structural changes in world politics.

The multidisciplinary and global focus in The Power of Cities in International Relations sheds much needed light on the significance of the reemergence of cities from the long shadow of the nation-state. Only by examining the mechanisms that have empowered cities in the last few decades can we understand their new functions and capabilities in global politics.

"By addressing the political dimension to cities in globalization, this book can be viewed as long overdue, but this does not mean that it lacks maturity in the way its themes are researched. Building upon the largely economic work on global cities, the chapters show how cities are not just actors in current international politics but that they have become integral to both old (‘high’) politics such as security and new politics such as environment. The Power of Cities in International Relations should become a benchmark for understanding twenty first century international relations."

Scholarly concern over the role of cities as sites for global governance and the organization of global activities has increased substantially over the past 25 years. The partial denationalization of global politics has been accompanied by the increasing importance of non-state and sub-national state actors, including municipal governments. It has further resulted in the rising significance of cities as sites in and for global governance. Cities serve as platforms for scale-jumping—the movement of organizations and issues across scalar boundaries—locales for networking, and sites for the convergence of disparate global ideologies. Global actors, by concentrating in cities, take advantage of propinquity and the dense networks available in the urban landscape to organize their activities, and in doing so, also establish certain cities as "nodes" in their global networks. At the same time, global ideologies are expressed in urban landscapes and global politics takes concrete form in cities.

Because of these developments, scholars of global affairs have expressed increasing interest in the presence and influence of the city in global governance. This series will feature unique perspectives on theoretical and empirical issues in the relationship between cities and global governance. The series will serve as a platform to theorize previously undertheorized aspects of the relationship, to challenge conventional wisdom in the field, and to offer new empirical analysis of the role of cities as sites and actors in global governance as well as the role of global governance on the ground in cities. Each volume will make a distinct contribution to one or more of these questions. Volumes may take various conceptual and methodological approaches. Some will study cases, others will examine networks; some will have a regional focus, others will have a global focus; some will be focused on cities as they intersect with particular issues in global governance.

Possible topics include, but are not limited to, the following: