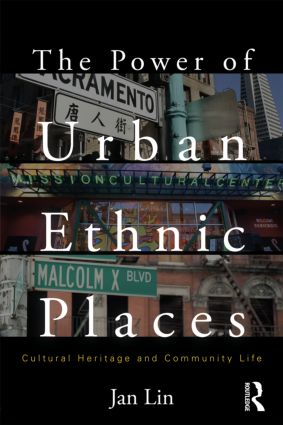 The Power of Urban Ethnic Places

The Power of Ethnic Places discusses the growing visibility of ethnic heritage places in U.S. society. The book examines a spectrum of case studies of Chinese, Latino and African American communities in the U.S., disagreeing with any perceptions that the rise of ethnic enclaves and heritage places are harbingers of separatism or balkanization. Instead, the text argues that by better understanding the power and dynamics of ethnic enclaves and heritage places in our society, we as a society will be better prepared to harness the economic and cultural changes related to globalization rather than be hurt or divided by these same forces of economic and cultural restructuring.

"Lin’s timely and innovative book on the politics of urban ethnic places in contemporary America provides a much needed comparative examination into the intersection of race, political economy, and activism in contemporary cities. This is a must-read and novel resource for anyone interested in critical urban studies and comparative ethnic studies."—Arlene Davila, Anthropology, New York University

"Drawing on rich fieldwork data and rigorous analysis, as well as insight from his own involvements in community work and teaching in world cities from coast to coast, Jan Lin convincingly argues that ethnic heritage sites offer a tool in counterbalancing urban decay and promoting neighborhood stability and sustainability. It makes an important contribution to contemporary urban sociology. "—Min Zhou, Sociology and Asian American Studies, University of California, Los Angeles

Pueblo to the Global City

Lower East Side and Impact of the 9/11 Disaster

Chapter 8 The Death and Life of Urban Ethnic Places

Jan Lin is emigrated from Taiwan to the U.S. in 1966. He has been teaching sociology at Occidental College since 1998. He is the author of Reconstructing Chinatown: Ethnic Enclave, Global Change (Minneapolis: University of Minnesota Press, 1998), and The Urban Sociology Reader (London: Routledge, 2005).

The Metropolis and Modern Life

This series brings original perspectives on key topics in urban research to today's students in a series of short accessible texts, guided readers, and practical handbooks. Each volume examines how long-standing urban phenomena continue to be relevant in an increasingly urban and global world, and in doing so, connects the best new scholarship with the wider concerns of students seeking to understand life in the twenty-first century metropolis.