The Practice of Reform in Health, Medicine, and Science, 1500–2000
Essays for Charles Webster 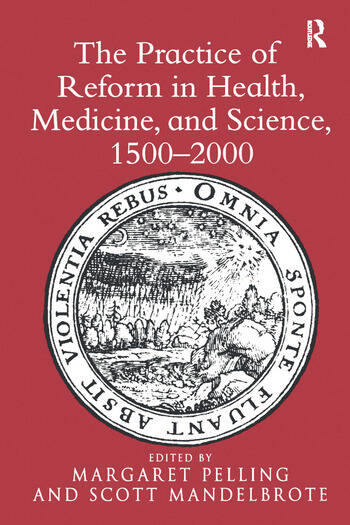 The Practice of Reform in Health, Medicine, and Science, 1500–2000: Essays for Charles Webster

Histories of medicine and science are histories of political and social change, as well as accounts of the transformation of particular disciplines over time. Taking their inspiration from the work of Charles Webster, the essays in this volume consider the effect that demands for social and political reform have had on the theory and, above all, the practice of medicine and science, and on the promotion of human health, from the Renaissance and Enlightenment up to the present. The eighteen essays by an international group of scholars provide case studies, covering a wide range of locations and contexts, of the successes and failures of reform and reformers in challenging the status quo. They discuss the impact of religious and secular ideologies on ideas about the nature and organization of health, medicine, and science, as well as the effects of social and political institutions, including the professions themselves, in shaping the possibilities for reform and renewal. The Practice of Reform in Health, Medicine, and Science, 1500-2000 also addresses the afterlife of reforming concepts, and describes local and regional differences in the practice and perception of reform, culminating in the politics of welfare in the twentieth century. The authors build up a composite picture of the interaction of politics and health, medicine, and science in western Europe over time that can pose questions for the future of policy as well as explaining some of the successes and failures of the past.

Contents: Preface: 'For the improvement of all things'; The instauration of the image of God in man: humanist anthropology, encyclopaedic pedagogy, Baconianism and universal reform, Howard Hotson; Harmony, health, and healing: music's role in early modern Paracelsian thought, Penelope Gouk; The economy of magic in early modern England, Lauren Kassell; Chemical medicine and Paracelsianism in Italy, 1550-1650, Antonio Clericuzio; Politics, medicine, and masculinity: physicians and office-bearing in early modern England, Margaret Pelling; A 'sanative contagion': Henry More on faith healing, Robert Crocker; William Petty and Anne Greene: medical and political reform in commonwealth Oxford, Scott Mandelbrote; Between anatomy and politics: John Finch and Italy, 1649-71, Stefano Villani; The origins of the Royal Society revisited, Mordechai Feingold; The 'great projector': John Cary and the legacy of Puritan reform in Bristol 1647-1720, Jonathan Barry; Medicine, race and radicalism in the later Scottish enlightenment, Colin Kidd; After the revolution: scientific language and French politics, 1795-1802, Pietro Corsi; 'Babies of the Empire': the evolution of infant welfare services in New Zealand and Britain in the first half of the 20th century, Linda Bryder; Hospitals, regions, and central authority: issues in Scottish hospital planning, 1947-74, John Stewart; Hospital provision, resource allocation, and the early National Health Service: the Sheffield regional hospital board, 1947-74, John Welshman; International recruitment of nurses to the UK: the history of the present, Anne Marie Rafferty; Professional status and professional regulation in the 1970s: the case of the Briggs committee on nursing and the Merrison committee on the regulation of the medical profession, Jane Lewis; New social movement or government-funded voluntary sector? ASH (Action on Smoking and Health), science, and anti-tobacco activism in the 1970s, Virginia Berridge; Select publications

’The principal strength of this volume lies in the study of a huge array of subjects taken by its contributors to research the history of health, medicine and science, with a particular emphasis upon reform.’ Local Population Studies ’... Pelling and Mandelbrote should be congratulated for putting together a coherent and at times provocative volume that provides a composite picture of the interaction of religion, politics, medicine and professional concerns in western Europe. In doing so, they have provided a fitting tribute to Webster and his work.’ Medical History