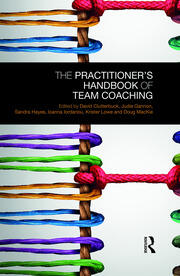 The world’s challenges are becoming more and more complex and adapting to those challenges will increasingly come from teams of people innovating together.

provides a dedicated and systematic guide to some of the most fundamental issues concerning the practice of team coaching. It seeks to enhance practice through illustrating and exploring an array of contextual issues and complexities entrenched in it. The aim of the volume is to provide a comprehensive overview of the field and, furthermore, to enhance the understanding and practice of team coaching. To do so, the editorial team presents, synthesizes and integrates relevant theories, research and practices that comprise and undergird team coaching. This book is, therefore, an invaluable specialist tool for team coaches of all levels; from novice to seasoned practitioners. With team coaching assuming an even more prominent place in institutional and organizational contexts nowadays, the book is bound to become an indispensable resource for any coaching training course, as well as a continuing professional development tool.

This book is essential reading for anyone with an interest in coaching, in both practice and educational settings. It will be of use not only for professional coaches, but also for leaders, managers, HR professionals, learners and educators, in the business, public, independent and voluntary sectors.

Section 1: Theories, Models and Research 1. Constructive Developmental Theory: A Lens for Team Coaching 2. Coaching Many: Team and Group Coaching 3. Systemic Team Coaching 4. Models of Shared Leadership and Team Coaching 5. Coaching Teams through Intentional Change Theory 6. Standing On The Shoulders Of The Science Of Team Effectiveness – Building Rigour Into Your Team Coaching Design 7. What Does Good Look Like? An Overview of the Research on the Effectiveness of Team Coaching 8. Defining team coaching – a practitioner perspective Section 2: Practice 9. Supporting System, Relational, and Intrapsychic Awareness Through Team Coaching 10. High Performance Team Coaching: An Evidence-based System to Enable Team Effectiveness 11. Emotion and Team Performance: Team Coaching Mindsets & Practices for Team Interventions 12. Beyond the theory of everything: group analysis, conversation and five questions to choose theory in action with teams 13. Breaking the Pattern in Teams: When the Solution is the Problem 14. Achieving the Dream Team: Five Best Practices for Coaching Global Virtual Teams 15. Spinning the Systems Wheel: turning the magic of ‘systems thinking’ into a practical tool for team coaching 16. Team Coaching: A Strength-Based Approach 17. Looking Outside-In: The case for a context-driven approach to team coaching Section 3: Training and Education 18. Virtual Team Coaching: Skills Learned from Research 19. The Making of a Team Coach 20. Supervising team coaches – working with complexity at a distance 21. Action, Reflection and Learning in Team Coaching 22. What are the Key Qualities and Skills of an Effective Team Coach? 23. Becoming a Team Coach Section 4: Emerging Perspectives 24. How can team leaders support team coaching and team development? 25. Coaching Virtual and Remote Teams 26. Team Coaching at Scale: Creating Conditions for Emergence of Adaptive Leadership Cultures 27. Team Coaching thru CDAI & the GLP 28. Using drama therapy to facilitate team coaching 29. Team coaching: passing trend or organizational staple? 30. Teams in self-governing developmental organisations: The need for peer-to-peer coaching Section 5: Cases 31. How does coaching help to support team working? 32. Leadership Team Coaching for an elite level sports organisation – a systemic perspective 33. From Good to Great at Southampton Football Club 34. A dialogic approach to coaching teams 35. The interplay of clarity, tension, trust and the coach’s competence - team coaching on a leadership development program 36. Shifting Policing Paradigms: The Roles of Collaboration & Team Coaching in Evidence-Based Policing Implementation 37. The Use of Psychometric Profiling in Team Coaching 38. GROUP Coaching of Global Virtual Teams: A Case Study

is a Senior Lecturer in the International Centre for Coaching and Mentoring Studies at Oxford Brookes University, UK.

is an adult learning and leadership expert with over 20 years’ experience helping leaders, teams and organizations grow and change.

is an organizational psychologist, a leadership and team coach, and the host of The Team Coaching Zone Podcast.

is a business psychologist, team and executive coach with over 25 years’ experience in the assessment and development of executive, leadership and team capability within top companies in Australia, Asia and the UK.