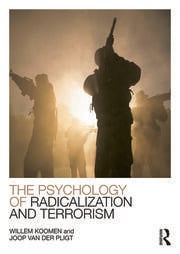 Terrorism and radicalization have a long history, but in recent years their prominence has been a particularly conspicuous and influential feature of the global political landscape. This important book presents an overview of the processes involved in radicalization and terrorism, and introduces a systematic framework which captures the most crucial individual and social factors involved in determining these processes.

The authors begin by considering the possible role of prejudice, economic deprivation, and discrimination, and the cognitive responses and emotions they can trigger. Such responses tend in turn to increase the importance of group membership, and promote intergroup differentiation and polarization, a process which is often accompanied by more pronounced and more extreme religious and ideological beliefs. The book also describes the role of cultural values and social climate in processes of radicalization, as well as the role of personality factors and demographics such as age and marital status.

As for violent terrorist action itself, this final most radical stage is elicited by a number of group factors such as groupthink, isolation, and leadership. Certain cognitive mechanisms – for example, dehumanizing the target and attributing responsibility elsewhere – can also provide excuses for violence. The book explores why some groups turn to violence and others don’t, and it addresses processes of disengagement, deradicalization programs, and other methods used to inhibit the spread of radicalization and terrorism.

takes a unique and systematic approach to a vital topic, integrating knowledge from diverse literatures, and using social psychology as a basis for comprehending human behaviour. It will be essential reading for students and researchers from all disciplines seeking a greater understanding of terrorism and violent political conflict in all its forms.

Willem Koomen has been affiliated with the Department of Social Psychology of the University of Amsterdam since 1963. His research interests include social cognition, and particularly stereotyping and stigmatization.

Joop van der Pligt was a professor in social psychology at the University of Amsterdam. His research interests pertained to attitudes, perceived risk and affect in relation to decision making. He died in 2015, when this book was almost completed.