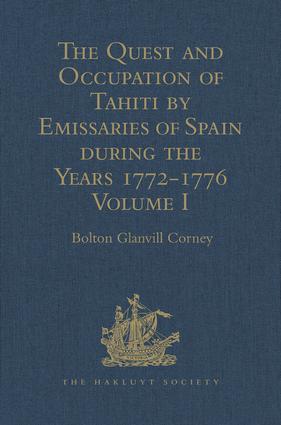 Told in Despatches and other Contemporary Documents. Volume I, 1st Edition

Instructions, minutes, despatches, and other documents from Spanish and English archives, relating to exploration of the East Indies, translated into English and compiled, with notes and an introduction.. Continued in Second Series 36 and 43. This is a new print-on-demand hardback edition of the volume first published in 1913. Owing to technical constraints the section of the large general chart of the islands, constructed by Don Juan Hervd, showing Huahine, Ra'iatea, Tahaa, and Porapora is not included.

Contents: Introduction; Bibliography; Excerpt from a recital of the events of his administration left by … Don Manuel De Amat, Viceroy … of Peru and Chile for the information and guidance of his successor, AD 1776; Royal Commands, minutes and despatches; Instructions issued by the Viceroy for the discovery and exploration of of David's (Easter) Island, 1770; Two extracts from the log of Capt. Anthony Hunt, HM frigate Tamar, at the Falkland Islands, 1769-70; Letter from the samr to the Admiralty 1770; Excerpt from a report by Don Josef Puig announcing his (fancied) discovery of Pepys' Island; Further despatches and Royal Commands bearing on the search for and occupation of Pepys' Island, the seizure of Port Egremont, the quest for David's (Easter) Island and the settlement of Tahiti; The opinion of Don Jorge Juan; The Viceroy's report of the sailing of HM frigate Aguila in search of the islands of San Carlos (Easter) and Otaheite, 1772; The Viceroy's despatch covering a list of articles shipped in the Aguila as gifts for the natives; Don Domingo Boenechea's report of arrival at Valparaiso in the Aguila after his successful 'discovery' of Otaheiti and 5 islands in its vicinity, 1772-3 ; The president of Chile's announcement of the same to the Secretary of State for the Indies; The viceroy's despatch announcing the Aguila's discoveries and safe return: with 3 enclosures; The Secretary of States acknowledgment … and Royal Command for the equipment of a second expedition to resume the exploration of Tahiti and to foster friendly relations with the natives; The Viceroy's despatch announcing the arrival of the Aguila at El Callao and her failure to reach San Carlos (Easter) Island: and enclosing a memorandum of information acquired from the nattives on board by Don Juan Hervé, the master; The opinion of Capt Don Juan de LÃ¡ngara Y Huerte on the aspects of the Aguila's commission and discoveries and the expediency or otherwise of occupying Tahiti; Royal Command

Routledge is pleased to be the publisher for the Hakluyt Society.

The Hakluyt Society has for its object the advancement of knowledge and education, particularly in relation to the understanding of world history. The society publishes scholarly editions of primary sources on the 'Voyages and Travels' undertaken by individuals from many parts of the globe. These address the geography, ethnology and natural history of the regions visited, covering all continents and every period over the last two thousand years. Such texts, many previously available only in manuscript or in unedited publications in languages other than English, are the essential records of the stages of inter-continental and inter-cultural encounter.

Established in 1846, the Society has to date published over 350 volumes. All editions are in English. Although a substantial number of the Society's past editions relate to British ventures, with documentary sources in English, the majority concern non-British enterprises and are based on texts in languages other than English. Material originally written in Spanish, Portuguese, Italian, French or Dutch has regularly appeared, material in Russian, Greek, Latin, Ethiopic, Chinese, Persian or Arabic occasionally.

All editions contain an introduction and scholarly annotation, giving both the general reader and the student a degree of assistance in understanding the material and providing guidance on the relevance of the episodes described, within the context of global development and world history. Volumes are often generously furnished with maps and contemporary illustrations.

Information about the Society may be obtained from the Administrative Assistant at the following address: