The Quito Papers and the New Urban Agenda 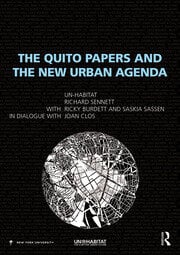 The Quito Papers and the New Urban Agenda

The future is urban. Indeed, the battle for sustainable development will be won or lost in cities. Not a moment too soon, then, that urbanization is suddenly at the centre of global policy making. In 2015 the governments of the UN adopted the 2030 Agenda for Sustainable Development and in 2016 they adopted the New Urban Agenda. However, the question of how these Agendas will be pursued concretely remains. Unfortunately, the prevailing model is rigidly technocratic Charter of Athens from 1933—the strict functionalist separation of activities that it prescribes still dominates planning practices worldwide.

The purpose of The Quito Papers and the New Urban Agenda is to start a discussion that both challenges this status quo and opens up new lines of enquiry. It intentionally does not propose a manifesto made up of simplistic slogans and recommendations as cities in the 21st century are more fragile and complex. Its content, therefore, is intentionally broad, ranging from architecture, planning and urban design, to land ownership and regulation, water management and environmental philosophy. This multifaceted assembly of perspectives critiques the tenets of the Charter of Athens, identify new trends and propose new insights on contemporary urbanization.

Part One outlines the overall challenges facing cities in the 21st century and Part Two offers a number of conceptual frameworks and approaches for dealing with those challenges. Each Part is also composed of a body of illustrated arguments, synthesized from selectively-abridged background papers from over 15 commissioned authors, interspersed with in-depth papers.

Preface: Why The Quito Papers?

The Universe of Cities

1.2: A massive loss of habitat is accelerating and driving new flows of migration

1.4: Lack of access to water and the risks caused by an excess of water require a rethinking on the place and shape of future urbanization

1.5: If democracy is to survive it will have to resist internal populism and embrace external cooperation

Who Owns the City?

2. The Science of Urbanization and the Open City

2.1: Good urbanization requires a three decade time horizon, a focus on value creation, capture and sharing and a compact between all levels of government

2.2: Open-system thinking and designing allow cities to evolve and change

2.3: Contemporary urbanism provides the opportunity to set aside the blank slate for an ethic of cohabitation

2.4: Planning and design should operate at both metropolitan and neighbourhood scales and provide adaptable interventions that bridge social inequalities

2.6: Integrative networks combine government- and self-led approaches and expand the right to the city

2.7: Commons can compensate for public/private deficiencies if they achieve sufficiently large-scale application in cities

2.8: Planning without democracy or democracy without planning? How cities might have it both ways

On Redistribution Policies and their Impact on Good Urbanization

Ricky Burdett, Professor of Urban Studies at the London School of Economics and Political Science and the director of LSE Cities and the Urban Age project

‘The Quito Papers and the New Urban Agenda is an anti-manifesto manifesto in that it confronts innate urban complexity and open-endedness, whilst holding on to a resolute belief in the power of thoughtful design as a passageway to generative urbanism. This book is a masterclass in how to provoke, animate, and curate persuasive arguments to dismantle moronic urban templates that are all too prevalent in favour of contextual invention. It is an indispensable read for urban activists, scientists, creatives, leaders, and of course, argumentative citizens.’

‘UN Habitat’s richly -illustrated, refreshing, thought-provoking collection, with contributions from Richard Sennett, Ricky Burdett, Saskia Sassen and Joan Clos, lays a strong foundation for the implementation of the New Urban Agenda. It's a must-read for the world’s citizens.’

‘The Quito Papers is a critical contribution to the New Urban Agenda. It provides a thought-provoking review of the challenges facing urbanization in the 21st century and it makes a powerful case for how planning and design at multiple scales can create a more ‘open city’, hopefully putting to rest the flawed master planning logic of the 20th century. It is a must read for urban leaders and policy makers.’