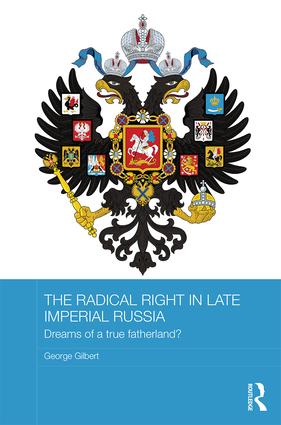 The revolutionary movements in late tsarist Russia inspired a reaction by groups on the right. Although these groups were ostensibly defending the status quo, they were in fact, as this book argues, very radical in many ways. This book discusses these radical rightist groups, showing how they developed considerable popular appeal across the whole Russian Empire, securing support from a wide cross-section of society. The book considers the nature and organisation of the groups, their ideologies and polices on particular issues and how they changed over time. The book concludes by examining how and why the groups lost momentum and support in the years immediately before the First World War, and briefly explores how far present day rightist groups in Russia are connected to this earlier movement.

'The book includes a helpful glossary of rightist individuals and organizations and a detailed map of the Pale of Settlement… the book greatly increases our knowledge of the Russian right.'

"It is refreshing when an author articulates his book’s main argument as clearly and succinctly as George Gilbert does on the first page of this fine study…The far-reaching value of Gilbert’s book is to remind us all—especially the younger generation of Russia experts brought up during the 1990s—that conservative and nationalist movements are integral components of civil society. We ignore them at the risk of blinding ourselves to very important social and political trends."

"The book is an important contribution to the history of the Russian right, a topic that has great relevance to post-Soviet Russian society."

Introduction 1. Precedents and Origins 2. In Reaction to Revolution 3. Across the Empire 4. Popular Mobilization 5. Russia Renewed 6. Towards Catastrophe 7. Conclusion

George Gilbert is a Lecturer in Twentieth-Century History at the University of Southampton, UK.