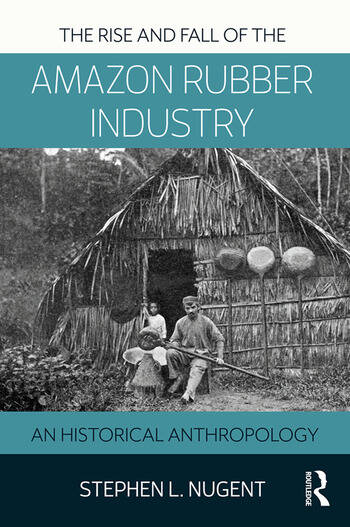 The Rise and Fall of the Amazon Rubber Industry: An Historical Anthropology

In this engaging book, Stephen Nugent offers an in-depth historical anthropology of a widely recognised feature of the Amazon region, examining the dramatic rise and fall of the rubber industry. He considers rubber in the Amazon from the perspective of a long-term extractive industry that linked remote forest tappers to technical innovations central to the industrial transformation of Europe and North America, emphasizing the links between the social landscape of Amazonia and the global economy. Through a critical examination focused on the rubber industry, Nugent addresses myths that continue to influence perceptions of Amazonia. The book challenges widely held assumptions about the hyper-naturalism of the ‘lost world’ of the Amazon where ‘the challenge of the tropics’ is still to be faced and the ‘frontiers of development’ are still to be settled. It is relevant for students and scholars of anthropology, Latin American studies, history, political ecology, geography and development studies.

Preface:  The Amazon Rubber Boom, Tapping into the Past
1. Requiem for the Amazon Rubber Boom
2. This Substance Called Rubber: Hevea and Its Relations
3. Anthropological Rubber in the Amazon
4. Postcards from El Dorado: an overview of historical accounts of the rubber  industry
5. Embedded Tropes and the Shift of Time
6. Failure as a Stage of Modernization, Part one: Narratives of failure
7. Failure as a Stage of Modernization, Part two:  Modernity redux, the failure of Fordlândia
8. After the Wild Frontier
9. The Melancholy and the Modern
10. Rubber in London
11. Concluding Comments

“As Sidney Mintz does with sugar, Nugent does with rubber. This is the story of a product tapped by Amazonian labourers that led to industrial expansion in the late nineteenth and early twentieth centuries. Illustrated with contemporary images, adverts and maps, the study is a treasure chest of a book. It reminds the reader of the value of an historical anthropology to examine the connections between workers, traders, capitalists, scientists and consumers in different corners of the globe. Yet this book is fundamentally about the Amazon, its people and their contribution to the modern world.”
Mark Harris, University of St Andrews, UK