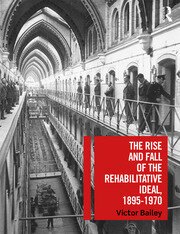 Spanning almost a century of penal policy and practice in England and Wales, this book is a study of the long arc of the rehabilitative ideal, beginning in 1895, the year of the Gladstone Committee on Prisons, and ending in 1970, when the policy of treating and training criminals was very much on the defensive.

Drawing on a plethora of source material, such as the official papers of mandarins, ministers, and magistrates, measures of public opinion, prisoner memoirs, publications of penal reform groups and prison officers, the reports of Royal Commissions and Departmental Committees, political opinion in both Houses of Parliament and the research of the first cadre of criminologists, this book comprehensively examines a number of aspects of the British penal system, including judicial sentencing, law-making, and the administration of legal penalties. In doing so, Victor Bailey expertly weaves a complex and nuanced picture of punishment in twentieth-century England and Wales, one that incorporates the enduring influence of the death penalty, and will force historians to revise their interpretation of twentieth-century social and penal policy.

This detailed and ground-breaking account of the rise and fall of the rehabilitative ideal will be essential reading for scholars and students of the history of crime and justice and historical criminology, as well as those interested in social and legal history.

7. Labour Government, Abolition and the Royal Commission on Capital Punishment, 1945-1953

8. Penal Practice in a Changing Society

12. Abolition of the Death Penalty

Victor Bailey was Director of the Hall Center for the Humanities from 2000 to 2017 and the Charles W. Battey Distinguished Professor of Modern British History at the University of Kansas, USA.

Professor Bailey has written an outstanding and important book. By tracing the rise and fall of the rehabilitative ideal within the English Justice system he raises vital questions about the nature of society. What is the purpose of prison? Is it ever possible to punish and reform at the same time? And, most importantly of all, to what extent does the corrosive nature of capital punishment inevitably dominate the discourse? Professor Bailey’s writing is always clear, his analysis always razor sharp. The product of a lifetime’s scholarship, this book is sure to become the standard work on the subject. It is impossible to recommend it too highly.

Laurence Rees, author of Auschwitz and The Holocaust: A New History.

The Rise and Fall of the Rehabilitative Ideal

will quickly become the substantive text for those students and researchers of penal policy and punishment during the twentieth century. It offers a thorough and detailed historical account of the development of penal policy and related areas across a crucial period of change. This is a highly readable text, written by one of the leading scholars in the field, it skilfully marshals the complex terrain and makes a significant contribution to the historiography.

This excellent account of penal experimentation in England illuminates the forces behind waves of retribution and the constraints on rehabilitative hopes. Public opinion, party policies, the symbolic importance of capital punishment and the crucial but largely neglected role of the judiciary are all explored from a wealth of original sources. Bailey contests accounts of revolutionary turning points (Garland, Wiener, Foucault), emphasizing continuities in socialist critiques, contractarian liberalism, and the prejudices and legal doctrines found in the high courts, where changing sentencing practices nonetheless had huge impact. An epilogue sets the recent enormous increase of the prison population within this longer history. An essential book.

Victor Bailey has been for many years a major authority on penal policy and the treatment of offenders in Britain. His study of the Young Offender, Delinquency and Citizenship (1987) was a pioneering, profoundly researched work of great interest to criminologists and historians, amongst others. This new work follows it up with a wide-ranging analysis of policy towards the adult offender, within the context of the idea of the rehabilitation of offenders, from the 1895 Gladstone Committee on Prisons down to the ending of capital punishment in 1969. The subject is addressed from a variety of approaches to penal policy and debate, from the slow abatement of the Victorians’ stern penitential attitude through the beginning of a more progressive and thoughtful policy of penal reform emerging between the wars. A key section of the book takes us from the Criminal Justice Bill of 1938 through the trauma of the wartime and post-years to the piecemeal and generally disappointing measure of 1948. Much of the attention in these years focused on trying to end capital punishment which, as Bailey shows, was in many ways a distraction from the more profound issues of rehabilitation of offenders. Reformers in parliament and parts of the civil services found themselves frustrated by the conservatism shown amongst the judiciary even in the heyday of post-war reform. In the end, pioneered by radical politicians like Silverman, civil servants like Maxwell and Scott, and influential ministers like Hoare and Callaghan, capital punishment was finally brought to an end. Even so, questions on the right balance between retribution and rehabilitation remained unanswered. The slow march towards a rational sentencing policy went on. One of the many merits of this work lies in never claiming too much for its conclusions. Anyone concerned with law and justice within a democratic society will learn much from this fine book.

Victor Bailey provides us with a long overdue account of the evolution of penal policy in Britain between 1895 and 1970. Grounded in a careful and wide-ranging reading of a wide variety of sources, judicial, administrative, and political, his book forces scholars to question long-held assumptions about the character of the twentieth-century penal regime and the major influences that shaped it. In particular, he offers a sobering re-evaluation of the supposed triumph of the "rehabilitative ideal" during this period. His volume is full of valuable insights that better help us understand the penal crisis of our own age.

With The Rise and Fall of the Rehabilitative Ideal, 1895-1970 Victor Bailey has provided the most thorough and judicious account of how modern English penal policy was formulated and re-formulated. Based deeply on government archives, it tells a complex story of multiple, often contending, influences - ideological, political and financial - that shaped how the governing class of civil servants and politicians developed, implemented and altered policies for dealing with criminal offenders, from an era in which "crime" seemed a problem well on the way to solution to our era of intense preoccupation with crime.

Deeply researched - and deeply felt – this long-pondered history authoritatively bridges the gap between the Radzinowicz/Hood 1984 history of English criminal justice 1750-1914 and the forthcoming post-World War II official history. Why did a rehabilitative ideal succeed in fending off judicial and popular fondness for corporal and capital punishment but fail to resist persistent retributive instincts which led to more than a doubling of the prison population? All this and more – much more – about a period continuing to mark the criminal justice system. This indispensable and accessible study explains why, wearing its considerable learning lightly and convincingly.

This provides a much-needed survey of the realities of penal policy and prison experiences 1895-1970. Though work by other scholars has already suggested that aspects of the traditional conceptualisations of prison realities then may not have been as supposed, this admirable work provides the first comprehensive survey of penal policy and implementation. It frames contemporary thinking in their widest context, seriously examining the judicial dimension (and it is unique in so doing) alongside public opinion. It should provide a model for future work, as well as filling in a current gap in the literature, for crime and legal historians as well as criminologists.

This important study by Victor Bailey advances our understanding of punishment and rehabilitation by providing a long-term perspective on the evolution of penal policy and penal practice in England and Wales. The book makes a significant contribution to our knowledge about the twentieth-century penal system, from the Gladstone Committee of 1895 until the 1970s, by which time the rehabilitative ideal was in retreat. This rigorous unpicking of rehabilitation through an examination of the many manifestations of the penal system complements his earlier study of penal policy for young offenders. Like that book, this book will quickly become a widely consulted history of twentieth-century punishment.

In tracking the rise and fall of the rehabilitative ideal, Professor Bailey has given us an indispensable history of penal policy and policymaking in the twentieth century. Significantly, he highlights the limits to the reach of rehabilitation, both as an ideal and as a reality, helping to contextualise the large prison population of our current era. This book is required reading for historians and criminologists, who will find they turn to it frequently.

Professor Bailey has produced a comprehensive and detailed account of penal policy in England and Wales from 1895 to 1970. Based on meticulous research in government archives, The Rise and Fall of the Rehabilitative Ideal demonstrates the complexities of penal policy and the limits of the ‘ideal’ even when its influence was supposedly at its zenith. It also points to the salience of the continued existence of the death penalty throughout this period and restores it to its place within the wider policy debate.