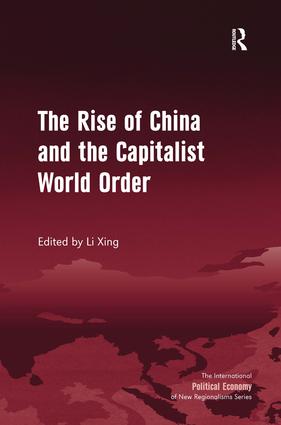 The Rise of China and the Capitalist World Order

China's rise within global society and politics has brought it into the spotlight - for social scientists, the country's long and dramatic transformations in the twentieth and twenty-first centuries make it an ideal case study for research on political and economic development and social changes. China's size, integration and dynamism are impacting on the functioning of the capitalist world system. This book offers a non-conventional analysis of the possible outcomes from China's transformation and provides a dialectical understanding of the complexities and underlying dynamics brought about by the rise of modern-day China. The theoretical and methodological approaches will prove useful for students and researchers of development studies and international relations.

'This book is a wake-up call for the West. That China is big is no news, nor that its entry in the world center is irreversible. That the Capitalist World Order will never be the same with China combining capitalism and socialism, market and state, with a basic concern for lifting people out of misery - often left there by Western practices - is new. Read and be wiser.' Johan Galtung, dr hc mult, Founder TRANSCEND: A peace development environment network

Contents: Introduction: the rise of China and the capitalist world order: the '4 China' nexus, Li Xing; The Eastern wind will not subside: China's long march back to the future?, Jacques Hersh; The myths and realities of the rising powers: is China a threat to the existing world order?, Mammo Muchie and Li Xing; China the international aid system: transformation or cooptation?, Paul Opoku-Mensah; The diaspora and the rise of nations: China and Africa compared, Li Xing and Paul Opoku-Mensah; Peak energy and the limits to economic growth: China and the world, Li Minqi; The transformation of China: the next between internalities and externalities, Li Xing; Chinese globalization: state strategies and their societal anchoring, Stig ThÃ¸gersen and Clemens Stubbe Ã˜stergaard; Why is the Chinese communist party able to sustain its hegemony in eras of great transformation?, Li Xing and Peer MÃ¸ller Christensen; Index.