The Role of Religion in Modern Societies 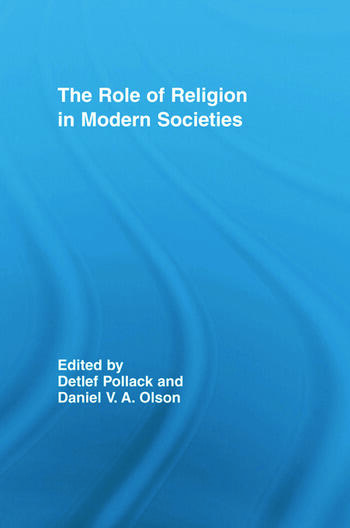 The Role of Religion in Modern Societies

Does modernization lead to the decline of religion? This question lies at the centre of a key debate in the sociology of religion. During the past decade American scholars, using primarily American data, have dominated this debate and have made a strong case that the answer to this question is no. Recently, however, a new crop of European scholars, working with new sources of European data, have uncovered evidence that points toward an affirmative answer.

This volume pays special attention to these trends and developments to provide the reader with a more well-rounded understanding of the many ways in which religion interacts with modernization. Respected scholars such as David Voas, Steve Bruce and Anthony Gill examine modern societies across the world in this splendid book which will interest sociologists, political scientists, historians, and theologians in equal measure.

Section One: The secularization theory: Classical assumptions and ramifications

Chapter 3: God, Gaelic and Needlepoint: Religion as a Social Accomplishment

Chapter 4: Religion in Central and Eastern Europe: Was There a Re-awakening After the Breakdown of Communism?

Chapter 6: Secularization and the State:

Chapter 8: From ‘Believing without belonging’ to ‘Vicarious Religion’:  Understanding the Patterns of Religion in Modern Europe

Chapter 9: The Cultural Paradigm: Declines in Belonging and Then Believing

Section Four: New theories on religion and modernity exemplified at the European case

Chapter 11: Religion and Science or Religion versus Science? About the Social Construction of the Science-Religion-Antagonism in the German Democratic Republic and its Lasting Consequences

Detlef Pollack is Professor of Comparative Sociology of Culture at Europa-Universitat Viadrina, Germany.