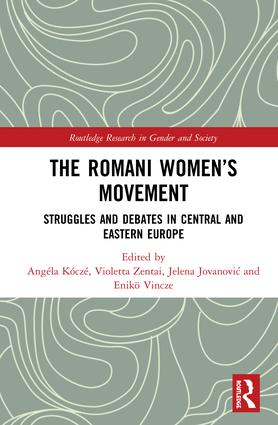 Struggles and Debates in Central and Eastern Europe, 1st Edition

The lack of recognition of Romani gender politics in the wider Romani movement and the women’s movements is accompanied by a scarcity of academic literature on Romani women’s mobilization in wider social justice struggles and debates.

The Romani Women’s Movement highlights the role that Romani women’s politics plays in shaping equality related discourses, policies, and movements in Central, Eastern and South-Eastern Europe. Presenting the diverse experiences and voices of Romani women activists, this volume reveals how they translate experiences of structural inequalities into political struggles by defining their own spaces of action; participating in formalized or less formal activist practices, and challenging the agendas and mechanisms of the established Romani and women’s movements.

Moving discourses on and of Romani women from the periphery of scholarly exchanges to the mainstream, the volume invites scholars and activists from different disciplines and movements to critically reflect on their engagements with particular social justice agendas. It will appeal to students, researchers and practitioners interested in fields such as social movements, gender equality, and social and ethnic justice.

This pioneering volume refocuses scholarship and activism in striking ways. The authors are as knowledgeable about feminist and gender theory as about the political dilemmas of activism. Filled with fresh, critical insights for productive alliances, the book is innovative in genre. Some chapters, inspired by postcolonial thought, offer sharp analyses of the Romani women's movement. In others, activists and scholars reflect together on their motivations and differences of position, identity and vision. Facing inward, the book courageously dissects tensions within Romani communities and among differently placed women. Facing outward, it locates Romani gender politics within European national and transnational contexts, in a regime of non-governmental organizations.

This much needed contribution is unique in three ways at least: as a novel and specifically European contribution to anti-racist scholarship; as a very fine-tuned, empirical and exemplary contribution to political intersectionality integrating race, sex, gender, sexuality and class; and as a solid scholarly illustration of giving voice to Romani feminist activists.

Justus-Liebig University Giessen, Germany, and University of Amsterdam, the Netherlands

The Romani Women’s Movement volume makes a key contribution to the field, enriching and revitalizing debates about the importance of theories and practices of structural and political intersectionality for an adequate understanding of the crucial role that the Romani women’s movement has played in the contemporary struggle for justice, equality, rights, and recognition for Romani women and men. This timely and important collection brings together a team of internationally pioneering scholars who themselves have played a vital role in the movement and who analyze its history, challenges, and prospects in the broader context of feminist, gender, Black, subaltern, and LGBTQI theories, practices, and movements.

Part I Social Categories and Agendas

Missed Opportunity or Building Blocks of a Movement? History and Lessons from the Roma Women’s Initiative’s Efforts to Mobilize European Romani Women’s Activism

Gender Relations and the Romani Women’s Movement in the Eyes of Romani Men: Towards the Potential for Transversal Politics

Heroines of Ours: Between Magnificence and Maleficence

Part II Linking the Personal and the Political

Towards an Anti-Racist Feminism for Social Justice in Romania

Romani Women’s Friendship, Empowerment, and Politics: Views on Romani Feminism in Serbia and Beyond

Romani Gender Politics in Hungary and Feminist Alliances in Practice

The Dilemmas of the Romani Women’s Movement in Bulgaria: From Assimilation to Empowerment?

The Challenges of Kalí NGOisation after Francoism: Rethinking Activism in and beyond Spain

Concluding remarks: Promises and Prospects of the Romani Women’s Movement in Central and Eastern Europe

is co-director of the Center for Policy Studies at the Central European University, Budapest, Hungary.

is Policy and Research Coordinator for the European Roma Grassroots Organizations (ERGO) Network, Brussels, Belgium as well as Research Affiliate of the Center for Policy Studies at Central European University, Budapest, Hungary.

is Professor at Babes-Bolyai University and housing activist in Cluj, Romania.