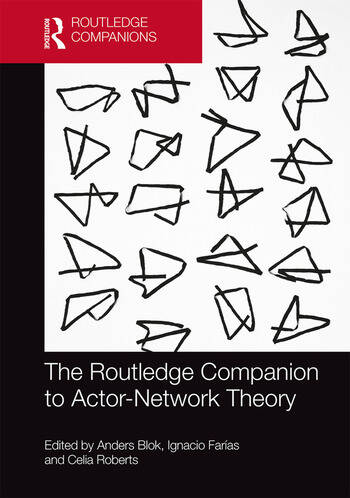 This companion explores ANT as an intellectual practice, tracking its movements and engagements with a wide range of other academic and activist projects. Showcasing the work of a diverse set of ‘second generation’ ANT scholars from around the world, it highlights the exciting depth and breadth of contemporary ANT and its future possibilities.

The companion has 38 chapters, each answering a key question about ANT and its capacities. Early chapters explore ANT as an intellectual practice and highlight ANT’s dialogues with other fields and key theorists. Others open critical, provocative discussions of its limitations. Later sections explore how ANT has been developed in a range of social scientific fields and how it has been used to explore a wide range of scales and sites. Chapters in the final section discuss ANT’s involvement in ‘real world’ endeavours such as disability and environmental activism, and even running a Chilean hospital. Each chapter contains an overview of relevant work and introduces original examples and ideas from the authors’ recent research. The chapters orient readers in rich, complex fields and can be read in any order or combination. Throughout the volume, authors mobilise ANT to explore and account for a range of exciting case studies: from wheelchair activism to parliamentary decision-making; from racial profiling to energy consumption monitoring; from queer sex to Korean cities. A comprehensive introduction by the editors explores the significance of ANT more broadly and provides an overview of the volume.

will be an inspiring and lively companion to academics and advanced undergraduates and postgraduates from across many disciplines across the social sciences, including Sociology, Geography, Politics and Urban Studies, Environmental Studies and STS, and anyone wishing to engage with ANT, to understand what it has already been used to do and to imagine what it might do in the future.

Actor-network theory as a companion: an inquiry into intellectual practices

Sect ion 1 - Some elements of the ANT paradigm(s)

1 What if ANT wouldn’t pursue agnosticism but care?

4 Can ANT compare with anthropology?

5 How to write after performativity?

6 Is ANT a critique of capital?

7 How to use ANT in inventive ways so that its critique will not run out of steam?

8 Is actant-rhizome ontology a more appropriate term for ANT?

9 What can ANT still learn from semiotics?

10 What did we forget about ANT’s roots in anthropology of writing?

11 As ANT is getting undone, can Pragmatism help us re-do it?

12 Why does ANT need Haraway for thinking about (gendered) bodies?

13 How does thinking with dementing bodies and A. N. Whitehead reassemble central propositions of ANT?

14 What is the relevance of Isabelle Stengers’ philosophy to ANT?

15 What can go wrong when people become interested in the non-human?

16 What possibilities would a queer actor-network theory generate?

17 Is ANT capable of tracing spaces of affect?

18 How to care for our accounts?

19 Is ANT an artistic practice?

20 How to stage a convergence between ANT and Southern sociologies?

21 What might ANT learn from Chinese medicine about difference?

23 What might we learn from ANT for studying healthcare issues in the majority world, and what might ANT learn in turn?

24 What is the value of ANT research into economic valuation devices?

25 How does ANT help us to rethink the city and its promises?

26 How to study the construction of subjectivity with ANT?

27 Why do maintenance and repair matter?

Sect ion 5 - The sites and scales of ANT

29 How does an ANT approach help us rethink the notion of site?

30 How does the South Korean city of Kyŏngju help ANT think place and scale?

31 How can ANT trace slow-moving environmental harms as they become eventful political disruptions?

32 Is ANT equally good in dealing with local, national and global natures?

33 What happens to ANT, and its emphasis on the socio-material grounding of the social, in digital sociology?

Sect ion 6 - The uses of ANT for public–professional engagement

35 How has ANT been helpful for public anthropologists after the 3.11 disaster in Japan?

37 How well does ANT equip designers for socio-material speculations?

38 How to run a hospital with ANT?

Anders Blok is an Associate Professor of Sociology at the University of Copenhagen. He is the co-author (with Torben E. Jensen) of Bruno Latour: Hybrid Thoughts in a Hybrid World (Routledge 2011) and the co-editor (with Ignacio Farías) of Urban Cosmopolitics: Agencements, Assemblies, Atmospheres (Routledge 2016).

Ignacio Farías is Professor of Urban Anthropology at the Humboldt University Berlin. He is the co-editor of Urban Assemblages: How Actor-Network Theory Changes Urban Studies (Routledge 2009, with Thomas Bender), Technical Democracy as a Challenge for Urban Studies (2016, with Anders Blok) and Studio Studies: Operations, Topologies & Displacements (Routledge 2015, with Alex Wilkie).

Celia Roberts is a Professor in the School of Sociology, Australian National University. She is the co-author, with Adrian Mackenzie and Maggie Mort, of Living Data: Making Sense of Health Biosensors (2019) and the author of Puberty in Crisis: The Sociology of Early Sexual Development (2016).