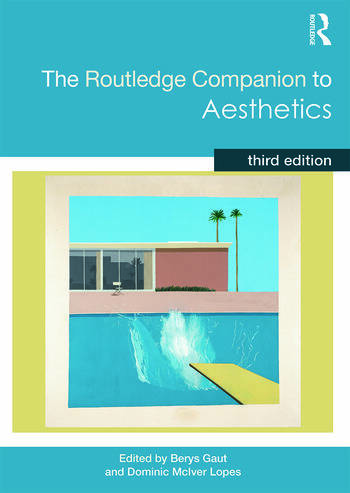 The third edition of the acclaimed Routledge Companion to Aesthetics contains over sixty chapters written by leading international scholars covering all aspects of aesthetics.

This companion opens with an historical overview of aesthetics including entries on Plato, Aristotle, Kant, Nietzsche, Heidegger, Adorno, Benjamin, Foucault, Goodman, and Wollheim. The second part covers the central concepts and theories of aesthetics, including the definitions of art, taste, the value of art, beauty, imagination, fiction, narrative, metaphor and pictorial representation. Part three is devoted to issues and challenges in aesthetics, including art and ethics, art and religion, creativity, environmental aesthetics and feminist aesthetics. The final part addresses the individual arts, including music, photography, film, videogames, literature, theater, dance, architecture and design.

With ten new entries, and revisions and updated suggestions for further reading throughout, The Routledge Companion to Aesthetics is essential for anyone interested in aesthetics, art, literature, and visual studies.

Berys Gaut is Professor of Philosophy at the University of St Andrews, Scotland, and President of the British Society of Aesthetics. He is the author of Art, Emotion and Ethics and A Philosophy of Cinematic Art, and co-author, with Morag Gaut, of Philosophy for Young Children: A Practical Guide (Routledge, 2011).

is Distinguished University Scholar and Professor of Philosophy at the University of British Columbia, Canada, and President of the American Society for Aesthetics. He is the author of Understanding Pictures, Sight and Sensibility: Evaluating Pictures, A Philosophy of Computer Art (Routledge, 2009) and Beyond Art.

"This is an immensely useful book that belongs in every college library and on the bookshelves of all serious students of aesthetics." - Journal of Aesthetics and Art Criticism

"Attests to the richness of modern aesthetics…the essays in central topics – many of which are written by well-known figures – succeed in being informative, balanced and intelligent without being too difficult." - British Journal of Aesthetics

"This handsome reference volume. . . belongs in every library." - CHOICE

"The succinctness and clarity of the essays will make this a source that individuals not familiar with aesthetics will find extremely helpful." - The Philosophical Quarterly

"An outstanding resource in aesthetics…this text will not only serve as a handy reference source for students and faculty alike, but it could also be used as a text for a course in the philosophy of art." - Australasian Journal of Philosophy

"The sheer eclecticism of this work – the variety of content, method, outlook and sensibility – shows the vigour and vitality that aesthetics as a branch of modern philosophy has come to assume in the last two or three decades. Its compilation is a real achievement, and it will appeal to a very wise range of readers. Some of these essays are, and will remain, classics of their kind." - Richard Wollheim