The Routledge Companion to Animal-Human History 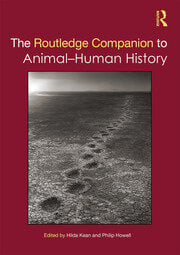 The Routledge Companion to Animal-Human History

The Routledge Companion to Animal-Human History provides an up-to-date guide for the historian working within the growing field of animal-human history. Giving a sense of the diversity and interdisciplinary nature of the field, cutting-edge contributions explore the practices of and challenges posed by historical studies of animals and animal-human relationships.

Divided into three parts, the Companion takes both a theoretical and practical approach to a field that is emerging as a prominent area of study. Animals and the Practice of History considers established practices of history, such as political history, public history and cultural memory, and how animal-human history can contribute to them. Problems and Paradigms identifies key historiographical issues to the field with contributors considering the challenges posed by topics such as agency, literature, art and emotional attachment. The final section, Themes and Provocations, looks at larger themes within the history of animal-human relationships in more depth, with contributions covering topics that include breeding, war, hunting and eating.

As it is increasingly recognised that nonhuman actors have contributed to the making of history, The Routledge Companion to Animal-Human History provides a timely and important contribution to the scholarship on animal-human history and surrounding debates.

I Animals and the Practice of History

Hilda Kean was Dean of Ruskin College, Oxford. Her many books include The Great Cat and Dog Massacre: The Real Story of the World War 11’s Unknown Tragedy (2017); Animal Rights: Political and Social Change in Britain since 1800 (1998); The Public History Reader (with Paul Martin, 2013).

Philip Howell is Reader in Historical Geography at the University of Cambridge. He is the author of Geographies of Regulation: Policing Prostitution in Nineteenth- Century Britain and the Empire (2009) and At Home and Astray: The Domestic Dog in Victorian Britain (2015).

‘With incisive writing from some excellent contributors, this volume makes a substantial contribution to our understanding of the complexity and diversity of animal-human histories.’

‘Until relatively recently, historians have been guilty of selectively ignoring the role that relationships with nonhuman animals have played in shaping, and in some cases transforming, human history. The Routledge Companion to Animal-Human History provides a series of timely and outstanding reviews of the complex issues and exciting opportunities that arise when the "conjoined histories" of humans and other animals are reconsidered.’

‘As the study of animal-human history continues to grow and diversify, I am sure that this ‘state of the art’ collection of essays will become a vital source. It opens up new, thought-provoking approaches to a range of themes, especially the active roles that animals have played in human history, and is lavishly referenced.’

'Setting out from an exemplary introduction to key issues in thinking about human-animal histories, the authors here are excellent companions with whom to journey into these mutual pasts. They indicate and explore ways in which human-animal histories can be researched, recovered, remade, and written in illuminating, instructive, and provocative ways.'

'Overall, then, the Companion showcases not only animal-human history's immense scope, but also the lively contradictions that abound within it ... Certainly, the political decision to include animals more explicitly in our historical writing and research is to be celebrated, not only for the intriguing questions this opens up, but for the potential futures towards which such work might lead.

'...a truly important contribution to the fast-expanding field...'

'As a wide-ranging survey of where animal–human history has been, what it is now, and which tools and approaches can be used to expand its reach in the future, the Routledge Companion to Animal–Human History is itself a statement of the coming of age of the field.'

'Kean and Howell have put together an extraordinary collection which will be a classic text not only for animal-human history in particular, but for human animal studies in general. With the proliferation of debates included and furthered here The Routledge Companion to Animal-Human History will inspire scholars well-versed in human animal studies as well as researchers and students beginning such studies.'