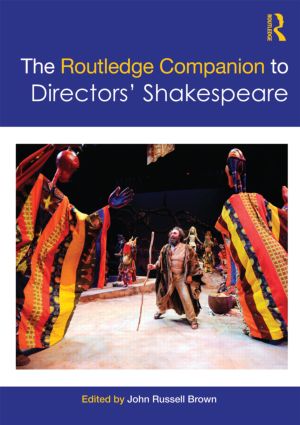 The Routledge Companion to Directors' Shakespeare

The Routledge Companion to Directors' Shakespeare is a major collaborative book about plays in performance. Thirty authoritative accounts describe in illuminating detail how some of theatre’s most talented directors have brought Shakespeare’s texts to the stage. Each chapter has a revealing story to tell as it explores a new and revitalising approach to the most familiar works in the English language.

A must-have work of reference for students of both Shakespeare and theatre, this book presents some of the most acclaimed productions of the last hundred years in a variety of cultural and political contexts. Each entry describes a director’s own theatrical vision, and methods of rehearsal and production. These studies chart the extraordinary feats of interpretation and innovation that have given Shakespeare’s plays enduring life in the theatre.

'Bringing directorial labour into sharp focus, this long overdue volume represents a valuable contribution to theatre history. It not only heightens our understanding of the art and craft of directing Shakespeare but also enables a comprehensive overview of over a century of directorial practice. This is a book to be read, and reread: there are deep pleasures here.' - Barbara Hodgdon, University of Michigan, USA

'An invaluable resource for anyone interested in modern Shakespeare production. The breadth of coverage is one of its greatest assets. A major contribution to Shakespeare performance studies.' - James Loehlin, University of Texas, USA

'Written by leading academics, this is a fascinating reference book for students and for the serious enthusiast. Its style is easily readable' – Whatsonstage.com

John Russell Brown has directed plays in England, the USA and around the world; he was an Associate Director of the Royal National Theatre for fifteen years and has chaired the Drama Panel of the Arts Council of Great Britain. He is author of numerous works on Shakespeare and contemporary theatre, including New Sites for Shakespeare (Routledge, 1999) and Shakespeare and the Theatrical Event (2002);  he is editor of The Oxford Illustrated History of Theatre (1995).