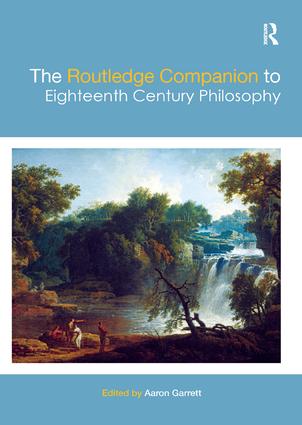 The Eighteenth century is one of the most important periods in the history of Western philosophy, witnessing philosophical, scientific, and social and political change on a vast scale. In spite of this, there are few single volume overviews of the philosophy of the period as a whole.

The Routledge Companion to Eighteenth Century Philosophy is an authoritative survey and assessment of this momentous period, covering major thinkers, topics and movements in Eighteenth century philosophy. Beginning with a substantial introduction by Aaron Garrett, the thirty-five specially commissioned chapters by an outstanding team of international contributors are organised into seven clear parts:

Major topics and themes are explored and discussed, ranging from materialism, free will and personal identity; to the emotions, the social contract, aesthetics, and the sciences, including mathematics and biology. The final section examines in more detail three figures central to the period: Hume, Rousseau and Kant. As such The Routledge Companion to Eighteenth Century Philosophy is essential reading for all students of the period, both in philosophy and related disciplines such as politics, literature, history and religious studies.

"A superb volume on eighteenth-century philosophy and a welcome addition to the Routledge Philosophy Companions series. The contributors are top-notch scholars in the field, and the choice and breakdown of topics is original and creative. It should be of great use to both students and seasoned experts." - Steven Nadler, University of Wisconsin-Madison, USA

"A superb collection, imaginatively conceived and expertly realized. Impressively comprehensive in its handling of recent scholarship on the history of eighteenth-century thought, the Companion also asks new questions about the relationship between philosophy and the arts and sciences in the European Enlightenment and Counter-Enlightenment. The result is a gift to students and essential reading for scholars of modern and early modern philosophy." - Thomas Holden, University of California-Santa Barbara, USA

"A marvelous volume. In Garrett's hands, "eclecticism" proves a fresh and useful way of viewing the period's rich philosophizing. It is high praise to say that this remarkable collection proves wonderfully eclectic as well." - Stephen Darwall, Yale University, USA

"A unique collection that embraces the eclecticism and innovation of a period in which philosophy rapidly and repeatedly reconceived itself. By adapting and combining the methodologies of a variety of schools the moderns developed a nimble, creative, and expansive philosophy. This Companion captures that vitality, and in doing so it is the most comprehensive and historically sensitive survey of eighteenth-century philosophy available." - Rebecca Copenhaver, Lewis & Clark College, USA

Aaron Garrett is Associate Professor of philosophy at Boston University, USA. He has published books on Spinoza and Berkeley, articles on many topics in early modern philosophy, and is the co-editor (with James Harris) of the Oxford History of Scottish Enlightenment Philosophy. He is currently working on two books on moral philosophy in the early modern period: The View from the Devil’s Mountain: Seventeenth-Century Moral Philosophy and The Reasonableness of Morality.