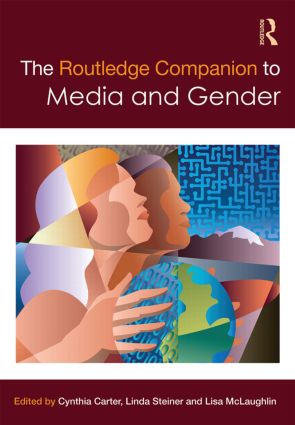 The Routledge Companion to Media & Gender

The Routledge Companion to Media and Gender offers a comprehensive examination of media and gender studies, charting its histories, investigating ongoing controversies, and assessing future trends.

The 59 chapters in this volume, written by leading researchers from around the world, provide scholars and students with an engaging and authoritative survey of current thinking in media and gender research.

The Routledge Companion to Media and Gender

is an essential guide to the central ideas, concepts and debates currently shaping media and gender research.

"This ambitious project investigates longstanding gender concerns in light of today’s media landscape. Its internationally diverse authors analyze production and reception of recent media texts—journalism, film, reality TV, gaming, music, sports and more—within a postfeminist, neoliberal, and networked popular culture. They also consider consequences of broader shifts in media ecology, such as unequal Internet access that exacerbates discrimination and the roles of social media in both empowering and commodifying women. Scholars will find a wide range of timely case studies and provocative ideas in this rich resource."

"The editors have put together a valuable compendium of essays from some of the leading scholars in the field.  The anthology offers a diverse array of perspectives —theoretical, political, and methodological — on the vital, complex, and ever-evolving sub-discipline of gender and media studies."

"With this Routledge Companion, three prominent feminist scholars have master-minded an important collection of chapters on gender and media contributed by accomplished scholars. This is truly a companion for the novice scholar needing an entrée into the vast and confusing literature that has grown over the past several decades and that ranges from theory on gender, sexuality, masculinity, intersectionality, transnationalism, and globalism to issues of violence, activism, pornography, news, gaming, social media, and sports. For the advanced scholar, the volume takes stock of where we have been and analyzes why we haven't arrived yet. A particular strength is the attention to reports from countries around the world and essays that don't let us forget the politics, economics, labor, production, and creative appropriation that must be accounted for in our approach to gender and media. We have the foundation documented for us. The next step is to imagine the world we want to live in and the communication systems we will need to make that world possible."

"Dedicated to an “extensive examination of a wide array of contemporary critical perspectives and diverse contexts,” the collection is essential for libraries and for those who study children, popular culture, psychology, sexual orientation, sociology, women and gender issues, and other areas of inquiry."

"[This collective volume] will prove to be of invaluable help to anyone – faculty staff and students – involved in teaching and working on this topic… Overall, [it] is an excellent effort that will find a natural fit in many course syllabuses in the fields of both media and women’s studies."