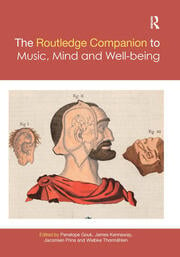 In recent decades, the relationship between music, emotions, health and well-being has become a hot topic. Scientific research and new neuro-imaging technologies have provided extraordinary new insights into how music affects our brains and bodies, and researchers in fields ranging from psychology and music therapy to history and sociology have turned their attention to the question of how music relates to mind, body, feelings and health, generating a wealth of insights as well as new challenges. Yet this work is often divided by discipline and methodology, resulting in parallel, yet separate discourses.

In this context, The Routledge Companion to Music, Mind and Well-being seeks to foster truly interdisciplinary approaches to key questions about the nature of musical experience and to demonstrate the importance of the conceptual and ideological frameworks underlying research in this field. Incorporating perspectives from musicology, history, psychology, neuroscience, music education, philosophy, sociology, linguistics and music therapy, this volume opens the way for a generative dialogue across both scientific and humanistic scholarship.

The Companion is divided into two sections. The chapters in the first, historical section consider the varied ways in which music, the emotions, well-being and their interactions have been understood in the past, from Antiquity to the twentieth century, shedding light on the intellectual origins of debates that continue today. The chapters in the second, contemporary section offer a variety of current scientific perspectives on these topics and engage wider philosophical problems. The Companion ends with chapters that explore the practical application of music in healthcare, education and welfare, drawing on work on music as a social and ecological phenomenon.

Contextualising contemporary scientific research on music within the history of ideas, this volume provides a unique overview of what it means to study music in relation to the mind and well-being.

1. Introduction: Historical and Contemporary Perspectives on Music, Mind and Well-being (Penelope Gouk, James Kennaway, Jacomien Prins and Wiebke Thormählen) SECTION ONE: From Antiquity to the Twentieth Century 2. Music, Mind and Well-being in Antiquity (Francesco Pelosi) 3. The Regulative Power of the Harmony of the Spheres in Medieval Latin, Arabic and Persian Sources (Andrew Hicks) 4. Girolamo Cardano on Music as a Remedy "For the Troubles that Result from the Misery of Human Misfortune" (Jacomien Prins) 5. Melancholy, Music and the Passions in English Culture Around 1600 (Penelope Gouk) 6. Musical Glasses, Metal Reeds and Broken Hearts: Two Cases of Melancholia Treated by New Musical Instruments (Carmel Raz and Stanley Finger) 7. Framing Emotional Responses to Music: Music-making and Social Well-being in Early Nineteenth-Century England (Wiebke Thormählen) 8. The Use of Music as a Treatment for Gemüthskrankheit in Nineteenth-century Viennese Psychiatry (Andrea Korenjak) 9. Anna O.’s Nervous Cough: Historical Perspectives on Neurological and Psychological Approaches to Music (James Kennaway) 10. "What Is This Music Doing to Me?": Psychological Experiments on the Effects of Music on Mood in the First Half of the Twentieth Century (Marta García Quiñones) 11. Music, Body and Emotion Between Well-being, Manipulation and Torture in the Twentieth Century (Juliane Brauer) SECTION TWO: The Twenty-first Century 12. Emotional Accounts of Musical Experience and Musical Object: On the Relationship Between Music and Emotion (Elvira Di Bona) 13. Understanding Music, Mind and Emotion from the Perspective of Psychoneuroimmunology (Daisy Fancourt) 14. Approaches to Music, Well-being and Emotion from Psychology: Theory, Method and Evidence (Alexandra Lamont) 15. Please Please Me! The Pleasure of Music in the Brain (Ole A. Heggli, Morten L. Kringelbach and Peter Vuust) 16. Three Controversies of Music and Emotions: Neuroscience and the Psychology of Sadness and Music (Tuomas Eerola) 17. Why We Listen to Sad-Sounding Music: Philosophical Perspectives, Psychological Functions and Underlying Brain Mechanisms (Liila Taruffi and Stefan Koelsch) 18. When Emotional Character Does Not Suffice: The Dimension of Expressiveness in the Cognitive Processing of Music and Language (Ariadne Loutrari and Marjorie Lorch) 19. Musical Engagement and Well-being in the Early Years of Life (Beatriz Ilari) 20. Music, Emotion and Learning (Jennie Henley) 21. Music, Cognition and Well-being in the Ageing (Susan Hallam) 22. The Goodness of Small Things: Why We Need Longitudinal and Ethnographic Studies of Music in Dementia Care (Mariko Hara and Tia DeNora)

Penelope Gouk is Honorary Research Fellow at the University of Manchester, UK, where she lectured until her retirement. Throughout her career the dominant theme of her research has been the intellectual history of music in early modern science and medicine. Most recently she has been investigating changing explanations for music's emotional effects, especially in Britain. Her publications include Music, Science and Natural Magic in Seventeenth-Century England (1999) and edited volumes Musical Healing in Cultural Contexts (2000) and, with Helen Hills Representing Emotions: New Connections in the Histories of Art, Music and Medicine (2005).

Kennaway is Senior Research Fellow at the University of Roehampton in London, UK. He has written extensively on the history of medicine and music, notably in his 2012 monograph Bad Vibrations: The History of the Idea of Music as a Cause of Disease.

is Assistant Professor/Researcher at the Ca’Foscari University of Venice, Italy. She has worked extensively on the interaction between music theory and philosophy in the Renaissance. Her work includes Echoes of an Invisible World: Marsilio Ficino and Francesco Patrizi on Cosmic Order and Music Theory (2014), Sing Aloud Harmonious Spheres: Renaissance Conceptions of Cosmic Harmony (2017), and an edition and translation of Marsilio Ficino’s commentary on Plato’s Timaeus (Harvard University Press, the I Tatti Renaissance Library series (ITRL)).

Thormählen is Area Leader in History at the Royal College of Music in London, UK. Her research focuses on the formulation of music as a language of emotions and its particular role in educational theories and policies since the eighteenth century. Recently awarded a three-year collaborative research grant from the Arts and Humanities Research Council (Music, Home and Heritage: Sounding the Domestic in Georgian Britain) she explores the interaction of the domestic with the public in musical arrangements, in devotional music and in the relationship between music as domestic social activity and amateur choral societies in Britain.