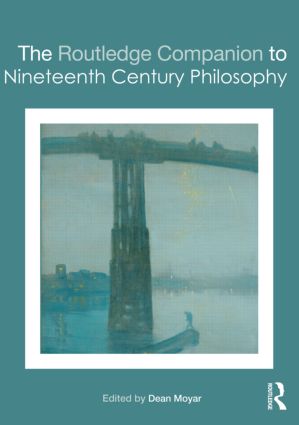 The nineteenth century is a period of stunning philosophical originality, characterised by radical engagement with the emerging human sciences. Often overshadowed by twentieth century philosophy which sought to reject some of its central tenets, the philosophers of the nineteenth century have re-emerged as profoundly important figures.

is an outstanding survey and assessment of the century as a whole. Divided into seven parts and including thirty chapters written by leading international scholars, the Companion examines and assesses the central topics, themes, and philosophers of the nineteenth century, presenting the first comprehensive picture of the period in a single volume:

is essential reading for students of philosophy, and for anyone interested in this period in related disciplines such as politics, history, literature and religion.

'This is a crucial resource for advanced undergraduates and faculty of any discipline who are interested in the 19th-century roots of contemporary philosophical problems. Summing Up: Essential.' - CHOICE

"… offers an unusually fine selection of themes and outstanding scholars to help philosophers come to grips with the 19th century … This volume has achieved its goals admirably." – Quaestiones Disputatae

"A genuinely comprehensive history of the major (and even many of the minor) figures of 19th-century philosophy, American, British and Continental European. It will prove a valuable resource for students and scholars seeking introductions to these philosophers." – Brian Leiter, University of Chicago, USA

"Impressive in both its breadth and the quality of its contributions. They are engaging, philosophically informative, and historically well-informed. In sum, the present collection proves very successful in fulfilling the promise implicit in the project of any such 'companion'." - Bernard Reginster, Brown University, USA

"This fascinating and very welcome collection of essays on nineteenth century philosophical thought is an impressive achievement by all concerned. I would recommend it highly to anyone with an interest in the field." - Robert Stern, The University of Sheffield, UK

Dean Moyar is Associate Professor in the Department of Philosophy at Johns Hopkins University. He is the co-editor (with Michael Quante) of Hegel’s Phenomenology of Spirit: A Critical Guide (2007), and the author of the Hegel’s Conscience (2010).