The Routledge Companion to Urban Imaginaries 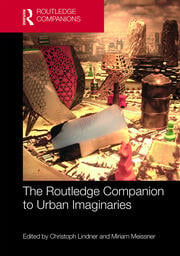 The Routledge Companion to Urban Imaginaries


The Routledge Companion to Urban Imaginaries delves into examples of urban imaginaries across multiple media and geographies: from new visions of smart, eco, and resilient cities to urban dystopias in popular culture; from architectural renderings of starchitecture and luxury living to performative activism for new spatial justice; and from speculative experiments in urban planning, fiction, and photography to augmented urban realities in crowd-mapping and mobile apps.

The volume brings various global perspectives together and into close dialogue to offer a broad, interdisciplinary, and critical overview of the current state of research on urban imaginaries. Questioning the politics of urban imagination, the companion gives particular attention to the role that urban imaginaries play in shaping the future of urban societies, communities, and built environments. Throughout the companion, issues of power, resistance, and uneven geographical development remain central. Adopting a transnational perspective, the volume challenges research on urban imaginaries from the perspective of globalization and postcolonial studies, inviting critical reconsiderations of urbanism in its diverse current forms and definitions. In the process, the companion explores issues of Western-centrism in urban research and design, and accommodates current attempts to radically rethink urban form and experience.

This is an essential resource for scholars and graduate researchers in the fields of urban planning and architecture; art, media, and cultural studies; film, visual, and literary studies; sociology and political science; geography; and anthropology.

1 Introduction: Urban imaginaries in theory and practice PART I Eco and resilient 2 Thirsty cities: Who owns the right to water? 3 Rapid adaptation and mitigation planning 4 Urban nature and the ecological imaginary 5 Litter and the urban imaginary: On chewing gum and street art 6 IHM-agining sustainability: Urban imaginaries in spaces of possibility 7 Formal encounters in two tales of toxicity: Bhopal, Animal’s People, Louisville, The Hard Weather Boating Party PART II Smart and digital 8 Smart urban: Imaginary, interiority, intelligence 9 The origin of the smart city imaginary: From the dawn of modernity to the eclipse of reason 10 Construction performance: How the camera charts progress on site 11 Authoritarianism and the transparent smart city 12 Digital urban imaginaries: Space, time and culture wars in the cyber-city 13 Urban exposure: Feminist crowd-mapping and the new urban imaginary 14 Every breath you take: Captured movements in the hyperconnected city PART III Connected and consuming 15 Imagining the open city: (Post-)Cosmopolitan urban imaginaries 16 Beyond East-meets-West: Contemporary Chinese art and urban imaginaries in cosmopolitan Shanghai 17 Toward a photographic urbanism? Images iconizing cities and swaying urban transformation 18 Macau’s materialist milieu: Portuguese pavement stones and the political economy of the Chinese urban imaginary 19 "Like diamonds in the sky": Imaginaries of urban girlhood 20 The city on the highway, revisited PART IV Uneven and divided 21 Brutalism, ruins, and the urban imaginary of gentrification 22 The end of the time of the city? Urbanization and the migrant in British cinema 23 Chicano Park’s urban imaginary: Ethnic ties bonded to place and redistributive urban justice 24 Arts districts and the reimagining of neighborhood through arts and culture-based development 25 Jia Zhangke’s cinematic vision of urban dystopia in contemporary China 26 ICONi©Cities: Global imaginaries of urban dispossession 27 Imagining the entitled middle-class self in the global city: Tiny Times, small-town youth, and the New Shanghainese PART V Speculative and transformative 28 Urban imaginaries and the palimpsest of the future 29 Emergent imaginaries: Place, struggle, and survival 30 Queer urban imaginaries 31 Crafted imagination: Future-builders and the contemporary logic of experimentalism 32 Urban space and the posthuman imaginary

Christoph Lindner is Professor and Dean of the College of Design at the University of Oregon, USA.

Miriam Meissner is Assistant Professor in Urban Studies at Maastricht University, The Netherlands.

"This book provides an important introduction to, and comprehensive overview of, contemporary scholarship on urban imaginaries. Lindner and Meissner have compiled an exciting collection of essays, connecting perspectives from the arts, humanities, and social sciences and drawing on cases from a broad range of media and geographical contexts. With its incisive analysis of the political role of the imagination in cities across the world, and an insightful focus on the crafting of urban futures, this book is likely to become a key resource in urban studies teaching and research."

Professor of Cities, Politics and Culture, University of Amsterdam, The Netherlands