The Routledge Companion to Victorian Literature 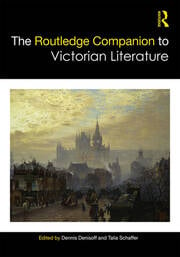 The Routledge Companion to Victorian Literature

The Routledge Companion to Victorian Literature offers 45 chapters by leading international scholars working with the most dynamic and influential political, cultural, and theoretical issues addressing Victorian literature today. Scholars and students will find this collection both useful and inspiring.

Rigorously engaged with current scholarship that is both historically sensitive and theoretically informed, the Routledge Companion places the genres of the novel, poetry, and drama and issues of gender, social class, and race in conversation with subjects like ecology, colonialism, the Gothic, digital humanities, sexualities, disability, material culture, and animal studies.

This guide is aimed at scholars who want to know the most significant critical approaches in Victorian studies, often written by the very scholars who helped found those fields. It addresses major theoretical movements such as narrative theory, formalism, historicism, and economic theory, as well as Victorian models of subjects such as anthropology, cognitive science, and religion. With its lists of key works, rich cross-referencing, extensive bibliographies, and explications of scholarly trajectories, the book is a crucial resource for graduate students and advanced undergraduates, while offering invaluable support to more seasoned scholars.

Dennis Denisoff is McFarlin Endowed Chair of English at the University of Tulsa. He is the author of, among other works, Aestheticism and Sexual Parody and Sexual Visuality from Literature to Film. He is the editor of Arthur Machen: Decadent and Occult Works and a special issue of Victorian Review on "Natural Environments," founding co-editor of The Yellow Nineties Online, and coeditor of Perennial Decay: On the Aesthetics and Politics of Decadence. He has recently published on sexuality, the occult, eco-spirituality, decadence, and the environmental humanities. He is currently editing a special issue of Victorian Literature and Culture on decadence and completing a monograph on decadent ecology and the new paganism (1860–1920).

Talia Schaffer is Professor of English at Queens College and The Graduate Center at City University of New York. She is the author of Romance’s Rival, Novel Craft, and The Forgotten Female Aesthetes. She has edited Literature and Culture at the Fin de Siècle, a scholarly edition of Lucas Malet's 1901 novel, The History of Sir Richard Calmady, and co-edited Women and British Aestheticism as well as a special issue of Victorian Review, "Extending Families." Schaffer has published widely on Victorian familial and marital norms, feminist scholarship, disability studies, ethical readings, women writers, material culture, and popular fiction. She is completing a monograph on the feminist theory of "ethics of care" as a new way of thinking about social collectivity in Victorian fiction.