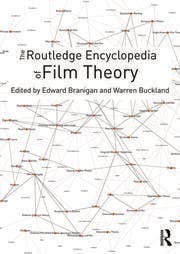 The result is a highly accessible volume that clearly defines, and analyzes step by step, many of the fundamental concepts in film theory, ranging from familiar concepts such as ‘Apparatus’, ‘Gaze’, ‘Genre’, and ‘Identification’, to less well-known and understood, but equally important concepts, such as Alain Badiou’s ‘Inaesthetics’, Gilles Deleuze’s ‘Time-Image’, and Jean-Luc Nancy’s ‘Evidence’.

is an ideal reference book for undergraduates of film studies, as well as graduate students new to the discipline.

Edward Branigan is Professor Emeritus in the Department of Film and Media Studies at the University of California, Santa Barbara. He is the author of Projecting a Camera: Language-Games in Film Theory, Narrative Comprehension and Film, and Point of View in the Cinema: A Theory of Narration and Subjectivity in Classical Film. With Charles Wolfe, he is the general editor of the American Film Institute Film Readers series.

is Reader in Film Studies at Oxford Brookes University. His areas of research include film theory (Film Theory: Rational Reconstructions, 2012 and The Cognitive Semiotics of Film, 2000) and film narratology (Puzzle Films: Complex Storytelling in Contemporary Cinema, 2009 and Hollywood Puzzle Films, 2014). He is editor of the quarterly journal the New Review of Film and Television Studies.

"The Routledge Encyclopedia of Film Theory is an astonishing achievement. Comprehensive – organized around no fewer than 83 distinct concepts – and authored by recognized specialists, it is sure to establish itself as a great teaching resource. Entries are concise and informative, written in clear language, which makes them especially helpful to students coming to film theory for the first time and seeking a user-friendly, but focused guide. The Editors are to be highly commended for the way they cross-list entries and map the connections between them."

"Branigan and Buckland's Encyclopedia of Film Theory is an extraordinary accomplishment. The entries present with clarity and order concepts from the entire history of film theory, often revealing surprising connections and filiations among ideas and authors. In the crowded field of theory overviews, this will be the essential reference work for many years to come for both beginning and advanced researchers."

"The Routledge Encyclopedia of Film Theory is both a wonderful map and intriguing maze. The encyclopedia retraces the history of film theory through more than eighty entries. Each reconstructs a debate, but also offers an up-dated perspective. My advice to the reader: (1) investigate your question; (2) then proceed randomly, as if you were surfing the Internet; (3) make connections be as strange as possible; (4) challenge the path from light to dark suggested by Branigan in the Epilogue, and disrupt it by finding new ways to make film live. Above all, savour the reading: it brings to light important chapters in the history of thought, and rediscovers what we thought we knew and what we think now."

"This volume attempts to address shortcomings in previous guides to film theory, which often can seem unwelcoming to the uninitiated... [and] offers a reference that is accessible to novice users through the use of concise, straightforward prose, which grounds discussion of key concepts in a limited number of canonical texts...this should prove to be a valuable reference for students engaged in film studies...Summing Up: Recommended."