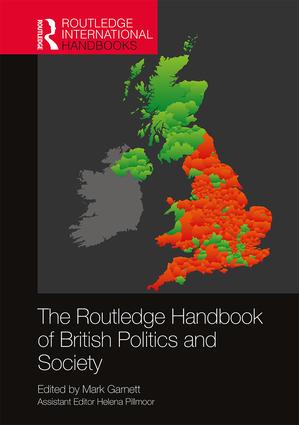 The Routledge Handbook of British Politics and Society

The Routledge Handbook of British Politics and Society conducts a rigorous, innovative and distinctive analysis of the relationship between British politics and society, emphasizing that the UK is now far from a monolithic, and unshifting, entity.

Examining the subject matter with unrivalled breadth and depth, it highlights and interrogates key contemporary debates on the future of the UK, the nature of 'Britishness', and the merits of multiculturalism, as well as contemporary criticisms of traditional institutions and the nature of representative democracy itself. Including contributions from key authors in their respective fields who bring their authority to bear on the task of outlining the current state of the art in British Studies, the book provides a fresh examination of the contrasts and the continuities across the whole field British Politics and Society, while setting out agendas for future research.

The Routledge Handbook of British Politics and Society

will be essential reading and an authoritative reference for scholars, students, researchers and practitioners involved in, and actively concerned about, research on British politics, society and culture.

"This is a particularly timely publication which deserves to be taken seriously. The key aspects of British politics are analysed in a rigorous and systematic way by leading experts. I wish it well."

"Not much is certain or fixed in British politics any longer. This book draws on a wide range of intellectual sources and different kinds of expertise to make sense of what is going on. The authors provide an essential and illuminating guide to political change in modern Britain."

"Comprehensive but approachable, this wide-ranging collection deserves to be read by anyone wanting to understand the UK's ever-changing political landscape."

Part I: Institutions and Practice

8. Politics and the Police: Recent developments in police governance and current issues surrounding police service delivery in England and Wales

9. Britain in the World

19. Politics in Wales since Devolution

20. The Politics of Northern Ireland