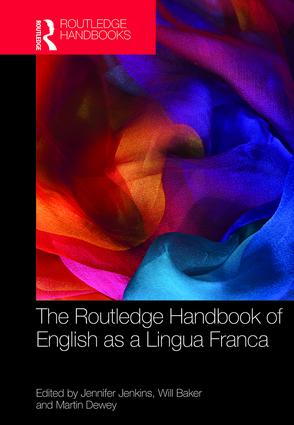 The Routledge Handbook of English as a Lingua Franca

The Routledge Handbook of English as a Lingua Franca (ELF) provides an accessible, authoritative and comprehensive introduction to the main theories, concepts, contexts and applications of this rapidly developing field of study.

This handbook is key reading for all those engaged in the study and research of English as a lingua franca and world/global Englishes more broadly, within English language, applied linguistics, and education.

"The chapters in this handbook constitute a valuable resource for students developing an interest in ELF, and for academic researchers, who will also find the suggested readings and ample bibliographic references a useful foundation for further investigations. The rapid pace of change in ELF research, still at an elementary stage in some areas, gives one reason to believe that a second edition of this handbook will be necessary in due course." -- Gibson Ferguson, University of Sheffield

Introduction to the volume

Part One: Conceptualising and positioning ELF

Martin Dewey is Senior Lecturer at King’s College London, where he is Programme Director for the MA in Applied Linguistics and ELT.

Routledge Handbooks in Applied Linguistics provide comprehensive overviews of the key topics in applied linguistics. All entries for the handbooks are specially commissioned and written by leading scholars in the field. Clear, accessible and carefully edited Routledge Handbooks in Applied Linguistics are the ideal resource for both advanced undergraduates and postgraduate students.