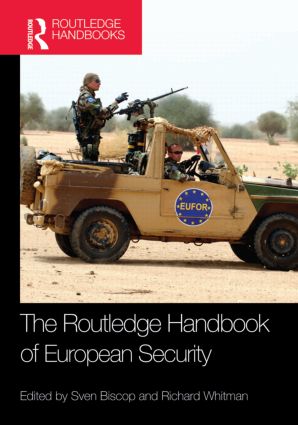 The Routledge Handbook of European Security

This new Handbook brings together key experts on European security from the academic and policy worlds to examine the European Union (EU) as an international security actor.

In the two decades since the end of the Cold War, the EU has gradually emerged as an autonomous actor in the field of security, aiming to safeguard European security by improving global security. However, the EU’s development as a security actor has certainly not remained uncontested, either by academics or by policy-makers, some of whom see the rise of the EU as a threat to their national and/or transatlantic policy outlook.

While the focus of this volume is on the politico-military dimension, security will also be put into the context of the holistic approach advocated by the EU. The book is organised into four key sections:

This Handbook will be essential reading for all students of European Security, the EU, European Politics, security studies and IR in general.

Introduction, Sven Biscop and Richard Whitman Part I: The EU as an International Security Actor 1. European Security Institutions 1945-2010: The Weaknesses and Strengths of ‘Brusselsisation’, Jolyon Howorth 2. Realism: A Dissident Voice in the Study of the CSDP, Adrian Hyde-Price 3. Liberal, Constructivist and Critical Studies of European Security, Knud Erik Jørgensen and Åsne Kalland Aarstad 4. The European Security Strategy: Towards a Grand Strategy?, Sven Biscop 5. European Strategic Culture: Taking Stock and Looking Ahead, Christoph O. Meyer Part II: Institutions, Instruments and Means 6. Diplomacy and the CFSP: With new hands on the wheel, have we something that’s real?, Geoffrey Edwards 7. Military CSDP: The Quest for Capability, Sven Biscop and Jo Coelmont 8. Civilian CSDP: A Tool for State-building?, Catriona Gourlay 9. Defence Industry and Technology: The Base for a More Capable Europe, Jan Joel Andersson 10. Security through Democracy: Between Aspiration and Pretence, Richard Youngs 11. Security and Development in EU External Relations: Converging, but in which Direction?, Karen Del Biondo, Stefan Oltsch & Jan Orbie Part III: Policies 12. The CSDP in the Western Balkans: From Experimental Pilot to Security Governance, Michael Merlingen 13. The Three Paradigms of European security in Eastern Europe: Co-operation, Competition and Conflict, Hiski Haukkala 14. Europe, the Southern Neighbourhood and the Middle East: Struggling for Coherence, Costanza Musu 15. The EU and Iran, Walter Posch 16. Sub-Sahara Africa, Richard Whitman 17. The EU and Asia – Towards Proactive Engagement?, Eva Gross 18. A New Geography of European Power?, James Rogers 19. The EU and Counter-Terrorism, Javier Argomaniz and Wyn Rees 20. The EU and Non-proliferation of Weapons of Mass Destruction, Gerrard Quille 21. Energy Security: A Missing Link between EU Energy and Foreign Policies, Sami Andoura Part IV: Partners 22. NATO and the United States: Working with the EU to Strengthen Euro-Atlantic Security, Leo Michel 23. The UN and European Strategy, Richard Gowan 24. CSDP and the OSCE: Time for Partnership to Reach its Full Potential?, Oleksandr Pavlyuk 25. The African Union a Partner for Security, Malte Brosig 26. The EU and its Strategic Partners: A Critical Assessment of the EU’s Strategic Partnerships, Thomas Renard

Sven Biscop is Director of the Europe in the World Programme at Egmont – Royal Institute for International Relations in Brussels, and Editor-in-Chief of its journal Studia Diplomatica and its Egmont Papers. He teaches at Ghent University and the College of Europe (Bruges).