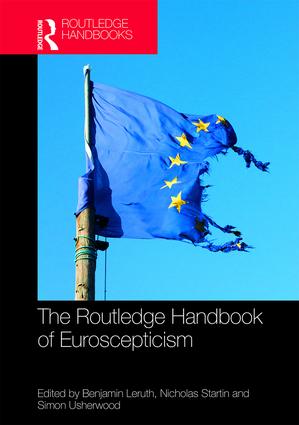 The Routledge Handbook of Euroscepticism

Since the advent of the 1992 Maastricht Treaty, a key turning point in terms of the crystallisation of opposition towards the European Union (EU), Euroscepticism has become a transnational phenomenon. The term ‘Euroscepticism’ has become common political language in all EU member states and, with the advent of the Eurozone, refugee and security crises have become increasingly ‘embedded’ within European nation states.

Bringing together a collection of essays by established and up-and-coming authors in the field, this handbook paints a fuller, more holistic picture of the extent to which the Eurosceptic debate has influenced the EU and its member states. Crucially, it also focuses on what the consequences of this development are likely to be for the future direction of the European project. By adopting a broad-based, thematic approach, the volume centres on theory and conceptualisation, political parties, public opinion, non-party groups, the role of referendums – and the media – and of scepticism within the EU institutions. It also reflects on the future of Euroscepticism studies following the United Kingdom’s vote to leave the EU.

Containing a full range of thematic contributions from eminent scholars in the field, The Routledge Handbook of Euroscepticism is a definitive frame of reference for academics, practitionersand those with an interest in the debate about the EU, and more broadly for students ofEuropean Studies, EU and European Politics.

Part I Euroscepticism: Theory and Conceptualisation

1. Defining Euroscepticism: From a Broad Concept to a Field of Study [Benjamin Leruth, Nicholas Startin and Simon Usherwood]

2. Contemporary Research on Euroscepticism: The State of the Art [Aleks Szczerbiak and Paul Taggart]

3. Theory, Concepts and Research Design in the Study of Euroscepticism [Sofia Vasilopoulou]

7. ‘Euromondialisme’ and the Growth of the Radical Right [Nicholas Startin]

10. The Dynamic of Euroscepticism in Germany[Alim Baluch]

12. Eurosceptic Parties in the Central and Eastern European Countries: A Comparative Case Study of Poland, Hungary and Bulgaria [Natasza Styczyńska]

13. Changing the Rules, Changing the Winners? The Various Effects of European Election Rules on Party Oppositions to the EU in France [Emmanuelle Reungoat]

16. Young People and the EU at Times of Crisis [Simona Guerra]

20. EU Referendums in the ‘New’ Member States: Politicisation after a Decade of Support? [Agnes Batory]

21. Referendums and European Integration: The Case of the United Kingdom [Chris Gifford and Ben Wellings]

22. When ‘No’ means ‘Yes’: A Comparative Study of Referendums in Denmark and Ireland [John FitzGibbon]

27. Mirroring or Setting the Political Agenda? The Role of the Media in the Eurosceptic Debate [Asimina Michailidou]

28. Varieties of Opposition to the EU in the Low Countries: A Comparison of the Dutch and Flemish Press [Patrick Bijsmans]

29. Euroscepticism in the EU Institutions: A Persistent and Embedded Phenomenon [Nathalie Brack and Olivier Costa]

30. Transnational and Pan-European Euroscepticism: The Case of the European Conservatives and Reformists [Benjamin Leruth]

31. Eurosceptic Members of the European Parliament: Foxes in the Henhouse? [Nathalie Brack]

32. The Far Right and the 2014 European Elections: Consequences for the Eurosceptic Debate [Cas Mudde]

33. The Impact of the Economic Crisis on Euroscepticism [Mark Baimbridge]

35. How the Referendum was Lost: An Analysis of the UK Referendum Campaign on EU Membership [Nicholas Startin]

Benjamin Leruth is an Assistant Professor in Politics and Public Administration at the Institute for Governance and Policy Analysis (IGPA), University of Canberra, Australia. His research focuses on Euroscepticism, differentiated integration in the European Union and public attitudes to political institutions. His publications include a Journal of European Public Policy special issue on differentiated integration (2015), a co-edited book entitled Euroscepticism as a Transnational and Pan-European Phenomenon (Routledge, 2017) and After Austerity (2017).

is Head of Department for Politics, Languages and International Studies (PoLIS) at the University of Bath, UK. His research focuses on Euroscepticism and the far right in contemporary Europe. He co-founded the UACES research network on Euroscepticism and has in recent years been the co-editor for two prominent, special issues on the topic in the Journal of Common Market Studies (2013) and the International Political Science Review (2015). He recently co-edited Euroscepticism as a Transnational and Pan-European Phenomenon (Routledge, 2017).

is a Reader in Politics at the University of Surrey, UK. His research focuses on Euroscepticism which has led him to co-found and organise an extensive network of colleagues across Europe, as well as working with practitioners in the EU, national government and other civil society groups. As well as numerous publications in this field, he is also very active on matters relating to the UK–EU relationship.