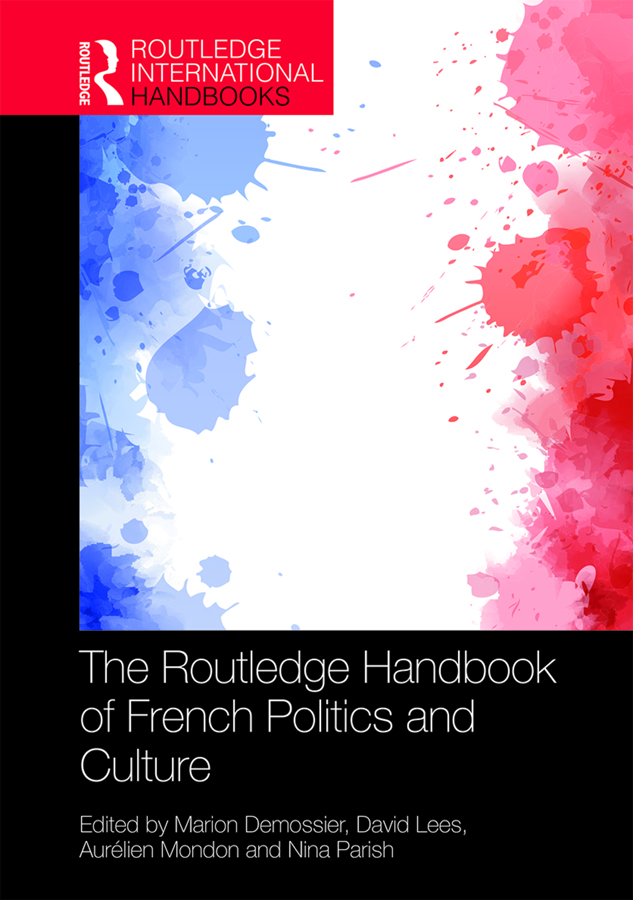 The Routledge Handbook of French Politics and Culture

The Routledge Handbook of French Politics and Culture provides a detailed survey of the highly differentiated field of research on French politics, society and culture across the social sciences and humanities.

The handbook includes contributions from the most eminent authors in their respective fields who bring their authority to bear on the task of outlining the current state-of-the art research in French Studies across disciplinary boundaries. As such, it represents an innovative as well as an authoritative survey of the field, representing an opportunity for a critical examination of the contrasts and the continuities in methodological and disciplinary orientations in a single volume.

The Routledge Handbook of French Politics and Culture will be essential reading and an authoritative reference for scholars, students, researchers and practitioners involved in, and actively concerned about, research on French politics, society and culture.

"This book is a very useful contribution to the study of French politics and culture today. It is a collective endeavour which highlights recurring aspects of French ‘exceptionalism’ as well as other trends in line with other European countries. This edited volume offers a timely assessment of France under the Macron presidency and stays abreast of the more recent and dramatic transformations of the political system, but also of major societal and cultural changes. The study is a snapshot into France in 2019, and is divided into sections, each of them deals with a particular aspect of contemporary France: the institutional system and recent political realignments, what it is to be French, spaces of political and cultural contestation, and issues mediating memories and culture. The authors draw on a variety of academic disciplines. This state-of-the-art volume fills a gap in the existing literature on French society as a whole." - Philippe Marlière, University College London, UK.

"An engaged, and engaging, journey through the political, social and cultural landscape of contemporary France. With an approach well-grounded in the history of modern France, this collective volume tackles many different forms of contemporary political and cultural contestation. On the way, the reader travels through physical spaces from the streets of Paris and the banlieue to the French countryside of the twenty-first century, meeting far more complex French identities and experiences than traditional Republican discourse would suggest. Less tangible spaces are also explored, those of traditional and new media and their effects, of voting patterns and the French political system, of gender, of migration and of the memories of the conduct and experiences of war and colonisation and their presence in the immediate every day. Successive chapters bring together aspects of Macron’s France as diverse as the evolving place of popular culture to changes affecting the political sphere, all asking fundamental questions about continuity and change in French politics and culture in the wider context of recent global shifts." - Debra Kelly, University of Westminster, UK.

"Any scholar of modern and contemporary France must confront the question of whether the country is, or has ever been, exceptional in relation to the rest of the global North. This rich and diverse collection of essays on French politics and culture is a very welcome and timely update on that perennial question. It provides illuminating overviews and detailed case studies on themes such as the 2017 elections, official and counter-narratives of the banlieue and Jewish culture and popular music, written by many of the leading experts in French studies. It is essential reading for anyone wanting to understand French society today." - Jan Windebank, University of Sheffield, UK.

Introduction: French Politics and Culture in the Macron Era

Part I: Politics in Modern and Contemporary France

1. From Despair, to Hope, to Limbo: The French Elections and the Future of the Republic

3. Gaullism as a Doctrine and Political Movement

4. France and the World: The African Dimension

6. The Politics of Migration

7. The Political Transversality of Islamophobia: An Analysis of Historical and Ideological Foundations

8. The new Politics of Racialisation in France: The Roma, Territorialisation and Mobility

9. Youth and Politics in France: Democratic Deficit or New Model of Citizenship?

10. Anti-racism, Race and the Republic in Contemporary France

13. The Good, the Bad and the Ugly: ‘Banlieue Youth’ as Figure of Speech and as Speaking Figures

15. Local and Social Belonging in the Contemporary French Rural World

16. Gender and Crisis: Women’s Writing in French at the Start of the Twenty-first Century

17. Remembering the First World War in France: HGG and Thiepval

22. The Multiple Deaths of the French Intellectuals

Marion Demossier is Professor of French and European Studies at the University of Southampton, UK, where she holds a Chair in Social Anthropology.

is Senior Teaching Fellow in French Studies at the University of Warwick, UK.

is Senior Lecturer in Politics at the University of Bath, UK.

is Professor in French and Francophone Studies at the University of Stirling, UK.