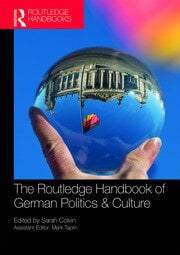 The Routledge Handbook of German Politics and Culture offers a wide-ranging and authoritative account of Germany in the 21st century. It gathers the expertise of internationally leading scholars of German culture, politics, and society to explore and explain:

This is an essential resource for students, researchers, and all those looking to understand contemporary German politics and culture.

Sarah Colvin is the Schröder Professor of German at the University of Cambridge, UK.

Mark Taplin is a freelance scholar, editor, and translator.

This is an impressively up-to-date and comprehensive survey of contemporary German political, economic and cultural life. It also offers important insights into Germany’s relationship with Europe and the wider world. The contributions, written by an array of internationally renowned scholars, are lively, interesting, informative and engaged. The book will be of great interest to scholars, students and the general public alike.

Anne Fuchs titles her essay, one of 28 in this fine collection, “World War II in cultural memory: Dresden as lieu de mémoire" and concludes, “Trauma, historical contextualization, and reconciliation are the three dominant interpretive schemas that have shaped a self-conscious memory of the Dresden bombing since German unification.”  One could argue that many of the pieces deal with these three themes in different ways and from different perspectives—political, economic, through the lens of gender, ethnic, religious, and international relations, among others.  The individual contributions (most by experts in their respective fields, from Ute Frevert and Mary Fulbrook to Jeffrey Anderson and Fatima El-Tayeb) are interpretive rather than descriptive, though many feature basic information related to Germany’s current political and economic system along with its cultural and social activities.  One can read these individually or note that several themes emerge in multiple essays—e.g., Germany as a European nation and the importance of “soft power” and cultural diplomacy as a feature of late-20th- and 21st-century policy.  The book serves as a significant snapshot of contemporary Germany by examining how it arrived at its current position and interrogating what is now defined as "German.”