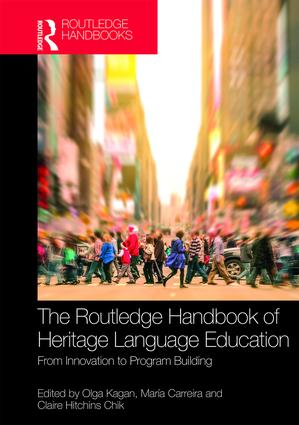 The Routledge Handbook of Heritage Language Education provides the rapidly growing and globalizing field of heritage language (HL) education with a cohesive overview of HL programs and practices relating to language maintenance and development, setting the stage for future work in the field. Driving this effort is the belief that if research and pedagogical advances in the HL field are to have the greatest impact, HL programs need to become firmly rooted in educational systems. Against a background of cultural and linguistic diversity that characterizes the twenty-first century, the volume outlines key issues in the design and implementation of HL programs across a range of educational sectors, institutional settings, sociolinguistic conditions, and geographical locations, specifically: North and Latin America, Europe, Israel, Australia, New Zealand, Japan, and Cambodia. All levels of schooling are included as the teaching of the following languages are discussed: Albanian, Arabic, Armenian (Eastern and Western), Bengali, Brazilian Portuguese, Chinese, Czech, French, Hindi-Urdu, Japanese, Khmer, Korean, Pasifika languages, Persian, Russian, Spanish, Turkish, Vietnamese, and Yiddish. These discussions contribute to the development and establishment of HL instructional paradigms through the experiences of “actors on the ground” as they respond to local conditions, instantiate current research and pedagogical findings, and seek solutions that are workable from an organizational standpoint. The Routledge Handbook of Heritage Language Education is an ideal resource for researchers and graduate students interested in heritage language education at home or abroad.

"This handbook sheds long overdue light on the status quo of major heritage languages mostly outside the U.S. It succeeds in presenting an important case to language educators, namely that they belong to a community and the more opportunities for dialogue that are created, such as this book, the better heritage education will be. This book also fulfills an important task - to indirectly argue that program development and teaching of heritage languages is an international field of research and policy making. This book is insightful not only for language educators but also for administrators, government officials and community leaders in both the U.S. and beyond."

Part I. A Landscape of Heritage/Community Languages: Demographic Surveys

The Constellation of Languages in Europe: Comparative Perspectives on Regional Minority and Immigrant Minority Languages

The Demographics of Heritage and Community Languages in the United States

Demographics and Heritage Languages in Latin America – An Overview

Demographics and Heritage Languages in Canada: Policies, Patterns, and Prospects

Patricia A. Duff and Ava Becker-Zayas

Crisis, Change, and Institutionalization: Adopting a New Curriculum at a Japanese Weekend School

Innovations in the Teaching of Portuguese as a Heritage Language: The Case of Brazilian Complementary Schools in London and Barcelona

Opportunities and Challenges of Institutionalizing a Pluricentric Diasporic Language: The Case of Armenian in Los Angeles

Education in the Cambodian Chinese Diaspora

Innovation vs. Tradition in Language Education: A Case of Japanese Heritage Language Instruction in Chile

Rationalization of the First Language First Model of Bilingual Development and Education: The case of Russian as a Heritage Language in Israel

Overcoming the Obstacles: Vietnamese and Khmer Heritage Programs in California

Russian as a Heritage Language in Lithuania

"The Right to Mother-Tongue Education for Migrants in the City": Factors Influencing the Institutionalization of a Two-Way Bilingual Immersion Program in Berlin

Classroom and Community Support for Turkish in Germany

Olga E. Kagan is Professor in the Department of Slavic, East European and Eurasian Languages and Cultures at the University of California, Los Angeles (UCLA), Director of the National Heritage Language Resource Center, and Co-Editor of the Heritage Language Journal.

Maria M. Carreira is Professor of Spanish at California State University, Long Beach. She is also Co-Director of the National Heritage Language Resource Center, Chair of the SAT Spanish Committee, and Associate Editor of Hispania.

Routledge Handbooks in Linguistics provide overviews of a whole subject area or sub-discipline in linguistics, and survey the state of the discipline including emerging and cutting edge areas. Edited by leading scholars, these volumes include contributions from key academics from around the world and are essential reading for both advanced undergraduate and postgraduate students.