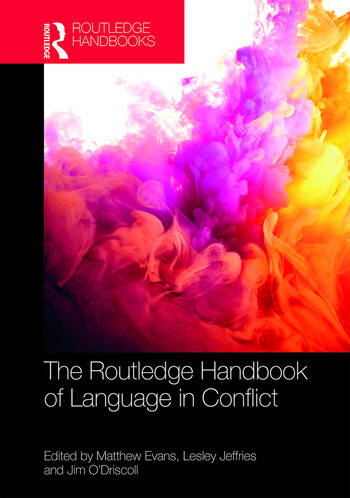 presents a range of linguistic approaches as a means for examining the nature of communication related to conflict. Divided into four sections, the Handbook critically examines text, interaction, languages and applications of linguistics in situations of conflict. Spanning 30 chapters by a variety of international scholars, this Handbook:

is an essential reference book for students and researchers of language and communication, linguistics, peace studies, international relations and conflict studies.

Introduction: the origins of the Routledge Handbook of Language in Conflict

2: Discursive (re)construction of the prelude to the 2003 Iraq War in op/ed pieces: dialectics of argument and rhetoric

4: Projecting your ‘opponent’’s views: linguistic negation and the potential for conflict

6: Homosexuality in Latvian and Polish parliamentary debates 1994-2013: a historical approach to conflict in political discourse

7: Conflict and categorisation: a corpus and discourse study of naming participants in forced migration

15: Leadership in conflict: disagreement and consensus negotiation in a start-up team

16: Interaction and conflict in digital communication

17: Introduction: conflict with the stuff of language

18: Ethnicity, conflict and language choice: the case of northern Ghana

19: Language and conflict in the Mapuche context

20: Linguistic Landscape as an arena of conflict: language removal, exclusion and ethnic identity construction in Lithuania

21: "You are shamed for speaking it or for not speaking it good enough": the paradoxical status of Spanish in the US Latino community

23: Language ideologies in conflict at the workplace

24: Introduction: the potential for Linguistics to change conflict in the ‘real’ world

25: The value of linguistics in assessing potential threats in an airport setting

28: Conflicts of policy and self-representation in the UK asylum process

29: On agency, witnessing and surviving: interpreters in situations of violent conflict

is a Lecturer in Linguistics and English Language at the University of Huddersfield.

is Professor of Linguistics and English Language at the University of Huddersfield.

is a member of the Language in Conflict team at the University of Huddersfield.

"The Routledge Handbook of Language in Conflict is the outcome of an innovative project started by the editors a decade ago. They have gradually extended the scope of their inquiry integrating the finest research in this new discipline. The book is a comprehensive overview of the field and a must-read publication for everyone who wants to know more about how language is used in conflict situations."

"The editors are to be commended for having put together a rich international range of excellent contributions on the thorny issue of social conflict – particularly with respect to what is happening on a daily basis in the social media – one that centrally involves language as ‘languaging’ in social interaction rather than language as a semiotic system."