The Routledge Handbook of Vegan Studies 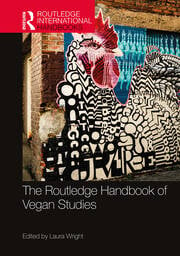 The Routledge Handbook of Vegan Studies

This wide-ranging volume explores the tension between the dietary practice of veganism and the manifestation, construction, and representation of a vegan identity in today’s society.

Emerging in the early 21st century, vegan studies is distinct from more familiar conceptions of "animal studies," an umbrella term for a three-pronged field that gained prominence in the late 1990s and early 2000s, consisting of critical animal studies, human animal studies, and posthumanism. While veganism is a consideration of these modes of inquiry, it is a decidedly different entity, an ethical delineator that for many scholars marks a complicated boundary between theoretical pursuit and lived experience. The Routledge Handbook of Vegan Studies is the must-have reference for the important topics, problems and key debates in the subject area and is the first of its kind. Comprising over 30 chapters by a team of international contributors, this handbook is divided into five parts:

• Vegan Studies in the Disciplines

• Veganism Around the World

These sections contextualize veganism beyond its status as a dietary choice, situating veganism within broader social, ethical, legal, theoretical, and artistic discourses. This book will be essential reading for students and researchers of vegan studies, animal studies and environmental ethics.

Part 2: Vegan Studies in the Disciplines

Part 4: Veganism is in the Media

Laura Wright is a Professor in the Department of English at Western Carolina University, USA.