The Routledge Handbook on the Reception of Classical Architecture 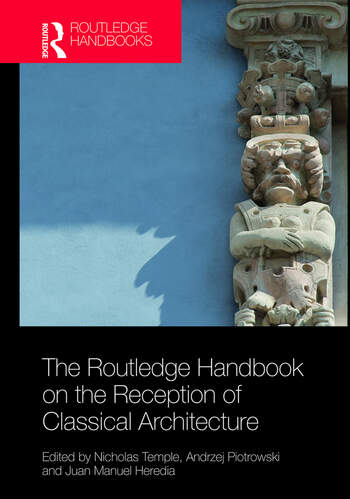 The Routledge Handbook on the Reception of Classical Architecture

This is the first comprehensive study of the reception of classical architecture in different regions of the world. Exploring the impact of colonialism, trade, slavery, religious missions, political ideology and intellectual/artistic exchange, the authors demonstrate how classical principles and ideas were disseminated and received across the globe. By addressing a number of contentious or unresolved issues highlighted in some historical surveys of architecture, the chapters presented in this volume question long-held assumptions about the notion of a universally accepted ‘classical tradition’ and its broadly Euro-centric perspective.

An essential reference guide, The Routledge Handbook on the Reception of Classical Architecture makes a major contribution to the study of architectural history in a new global context.

an architect educated in Poland and Professor of Architecture at the University of Minnesota, USA, combines in his scholarship theory and history of architecture. His Jeffrey Cook Award-winning research focuses on the epistemology of design. Covering global issues of architecture, religion, politics and culture, his findings have been presented in many architectural and cross-disciplinary conferences. He is the author of Architecture of Thought (2011) and co-editor with J. Williams Robinson of The Discipline of Architecture (2001). Currently, he serves as an associate editor of the Traditional Dwellings and Settlements Review and is working on a book entitled A Heretical History of Architecture.

is Associate Professor of Architecture at Portland State University, USA, having completed a PhD and Master of Architecture at the University of Pennsylvania. He also holds a Diploma of Philosophy from Universidad Iberoamericana/Mexico City. Heredia studied and practised architecture in Mexico before moving to the USA in 1999 to pursue graduate studies. His research focuses on architectural theory and history, especially of the twentieth century. His work has been published in Arquine and Bitacora (Mexico), On-Site Review (Canada) and Arkitekten (Denmark). In 2009 he co-organised the Second International Architecture and Phenomenology Conference held in Kyoto, Japan. His current writing focuses on twentieth-century architecture in Mexico and Latin America. He is the author of the forthcoming book The First Modern Building in Mexico (2020).

"While accomplishing its ambitions to examine the reception of classical architecture around the world, this remarkably edited collection is no mere compilation of scholarship under set ideological assumptions. Beyond impeccable and original historiography, its great merit is a critical openness to the complexity of cultural, social and political issues raised by the topic. Given the European origins of global technological civilization, the particular adoption of the classical tradition in diverse postclassical and modern historical contexts is a timely topic to orient our conversations about appropriate architectural practices." - Alberto Perez-Gomez, Bronfman Professor of the History and Theory of Architecture, McGill University, Montreal, and author of Attunement, Architectural Meaning after the Crisis of Modern Science

"This book clarifies the decisive differences between the style we call classicism and the ideas and practices that define the classical tradition, as received and revised in Europe and beyond. Readers will discover how the tradition’s creative nucleus re-established itself throughout the world, thus authorizing comparably creative revisions for any one at work in architecture today." - David Leatherbarrow, Professor of Architecture, University of Pennsylvania

"Was it the same 'classic' architecture the Romans took to Libya, the Jesuit missionaries to the Kangxi Emperor and Sir Edwin Lutyens and Sir Herbert Baker got the Indians to build in Delhi? Or is it all more brutal, as Goethe thought:: 'classical is healthy, romantic is sick'. If you have wondered about such matters Temple's, Piotrowski's and Heredia's book offers a unique panorama of such problems." - Joseph Rykwert CBE, Professor Emeritus of Architecture, University of Pennsylvania